Mark Lemminger is making a quick turnaround at Bellator 244. In fact, after winning his promotional debut at Bellator 242 at the end of July, Wisconsin’s Lemminger (11-1) will now become the first Bellator fighter to have competed twice during the pandemic.

The quick turnaround was something he was game for. “I said after my last fight that I was injury free and I was ready to get back in there,” Lemminger told Cageside Press this week. “I wasn’t expecting it to be this fast, but a couple days after the fight my manager hit me up and said ‘hey, we got an opportunity for you.’ I jumped on it.”

That sort of turnaround works well for the welterweight. “I like to keep my weight down, stay in the gym, stay motivated. Sometimes those long layoffs, it’s easy to kind of relax a little bit, and the next thing you know, you’ve got a big weight cut.”

He won’t have that this time, having competed to recently. The quick turnaround also makes up for some cancelled bouts earlier in 2020. “I like keeping the ball rolling,” Lemminger said. “I had a couple of fights this year that ended up falling through. So I’ve basically been training the whole year for fights, but I don’t mind it.”

Those cancelled fights had been scheduled against Carlo Pedersoli and Ion Pascu. A staph infection suffered by Pedersoli scuttled the first; the pandemic took the second.

“I handled it better than I thought it would,” Lemminger said of the back-to-back cancellations. “When those didn’t happen, I just moved on, and just kept training. I knew that eventually one was going to work out, which it did.”

What those cancellations led to was his debut against Jake Smith at Bellator 242. A lesser-known name, being honest, with Lemminger earning a second-round TKO win. But that also punched his ticket to a fight this Friday against the undefeated Yaroslav Amosov.

23-0 is unquestionably a daunting record. The key to spoiling it, Lemminger explained, is that “I’ve got to go out and I’ve got to fight my fight.”

“He’s really good at making it his game, luring guys into his game,” he added. “He’s a tough task for anyone, but I’m up for the challenge. Ever since I got the call to fight him, I’ve been really motivated about it. I like opportunities like this, so hopefully I’ll be the one to take that 0 from him.”

Perhaps giving him a bit of an advantage will be the coronavirus pandemic itself. While others have struggled to continue training, “I lucked out,” Lemminger admitted. “I have my own little gym a block from my house. I have my own cage, my own workout facility there. So I was able to use that during the lockdown, and invite a small group of teammates to continue practices until we were able to open up our gym in Madison, and start training with our pro team altogether.”

Lemminger’s father owns the building, he explained. He took over one of his dad’s old offices well before the pandemic hit. As a result, “the lockdown really didn’t slow me down at all,” he said. “That’s one advantage that I will bring into this.”

Weight isn’t likely to be an issue either. Lemminger made 170lbs for his fight with Smith in July; Friday, he and Amosov will face off at a 175lb catchweight.

A win will put Lemminger in a sweet position in Bellator’s welterweight division. He hasn’t looked that far ahead just yet, but he’s excited to get there. “I’m taking it step-by-step. This fight came up so fast, all I’ve really been doing is focusing on getting the win for this fight,” Lemminger told us. “But as soon as this fight’s over, that’ll be in the past and i’ll be looking on to what’s next. That’ll be a big statement, beating [Amosov], so I’m excited for that.”

Bellator 244 takes place this Friday, August 21 at the Mohegan Sun Arena in Uncasville, CT. The main card airs live on Paramount Network and DAZN, with prelims available on Youtube. 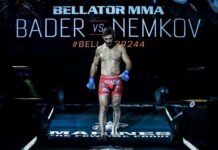