Merab Dvalishvili has been very much akin to his “Machine” nickname in his recent run through the bantamweight division. The Georgian fighter has been a force to be reckoned with, breaking his own record for most takedowns in a single fight. At UFC 252 on Saturday night in Las Vegas, however, Dvalishvili would be getting the toughest test of his career against John Dodson.

Dodson had recently bounced back into the win column after defeating Nathaniel Wood. He’s be looking to bounce back against the takedowns of Dvalishvili on Saturday.

A long feeling out process kicked off the bout with neither fighter throwing much for the first two minutes. After a relative lack of action, Dvalishvili finally got a hold of Dodson and landed a takedown, a mat return, and a fair number of knees to the thighs. With just under a minute to go, they separated, but did little in that final minute.

But the Magician is elusive on the ground. #UFC252 pic.twitter.com/jWvvAseI9f

The second round blessed us with a little more in the way of early exchanges. A couple of minutes in, Dvalishvili was able to get in on a double and picked Dodson up, then slammed him down. Dodson was quick to his feet after the slam, but Dvalishvili was pressing all of the action. He landed a spinning back fist before engaging in more cage work and another takedown, with Dodson returning to his feet quickly. Dodson had a bit more success on the feet towards the end of the round, but Dvalishvili landed another late takedown.

The third round saw Dvalishvili come out much more aggressive with his strikes, landing at a decent clip. Another big pick up from Dvalishvili, but he modified by trying to drop Dodson down slowly to try to get more top game. Dodson slipped away as easily as before and they returned to the feet. Dvailishvili spent most of the rest of this round pushing forward. A big right hand and another takedown punctuated the round for the Georgian. 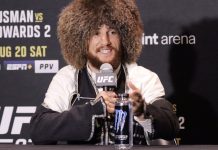