Hawaii’s Kai Kamaka III and Louisiana’s Tony Kelley kicked off the UFC 252 card Saturday. They also kicked off their UFC careers. The featherweight pairing was a last-minute addition to the card, which had an early preliminary set of two fights, comprised of four debuting fighters.

In the first, both men had their moments. There was a lot of movement for Kelley early on, stabbing with punches and moving right out of the way. Kelley was showing some good technique, landing his straight right and attacking with a leg kick. Kamaka was timing his strikes very well, especially with the left hand, and ripping the body. Kamaka hurt Kelley with a nice left hook to the liver, and quickly got a brief takedown. Not much time was spent on the mat; back on the feet Kamaka kept right after that liver, ripping to the body and visibly hurting Kelley. Kamaka got another takedown and ended the round pressing Kelley against the cage.

It was a pretty good pace, given how recently this bout came together. Round two started with Kelley landing more leg kicks, but there wasn’t much power behind them. Kelley seemed tired from the body shots in round one, and Kai continued to go after it. Kamaka was completely focused on the body, landing his left hook and trowing a teep kick right up the middle. Both men stood in the pocket and let out a lot of output, both landing very well. Quickly following that, Kamaka secured a double leg takedown. Kelley got right back up but went right back down only briefly again. The round ended with some nice Muay Thai work from Kelley, who was landing knees and elbows to the side of the head.

Potentially down 2-0? 📝@TonyKelleyMMA is absolutely bringing it to start RD 3.

Depending on how the judges had scored it, it was do or die for Tony Kelley in the third. Which is perhaps why Kelley came out firing in round three, landing leg kicks, knees, and some nice hooks. Kai Kamaka was ducking his head away from the damage, so Kelley grabbed the guillotine and pulled guard. The guillotine was lost but Kelley eventually got back his feet. Immediately both fighters started slinging punches in a phone booth, each finding their moments, landing at an insane pace. Kamaka shot again for a takedown but this time Kelley defended. A pause to the action was caused from a low blow to Kamaka. Back underway, Kelley was going to the head but every time he got close Kamaka answered by ripping the body yet again. They’d go to the bell — what a way to start the night, with an amazing scrap. 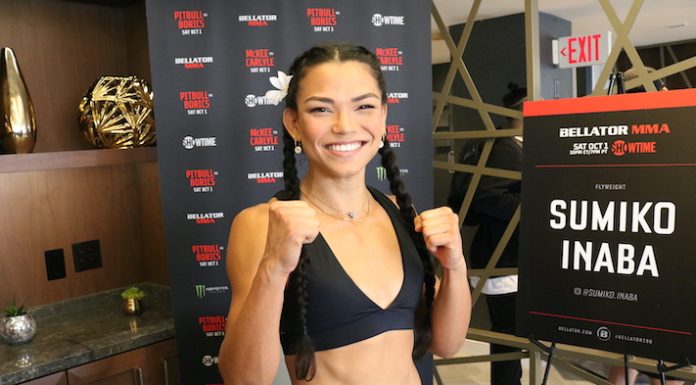