Anthony Smith and Aleksandar Rakic will get to fight in the main event on August 29 and put a stamp on what has been a busy month for the UFC.

News of the headliner was announced earlier in the night during the UFC 252 prelims.

The Smith vs. Rakic fight will be three rounds, replacing Yair Rodriguez vs. Zabit Magomedsharipov. We might have a newly cursed fight behind Tony Ferguson vs. Khabib Nurmagomedov, as Rodriguez and Magomedsharipov were expected to headline prior to Yair withdrawing due to an ankle injury. The pair has been booked more than once.

The last time Anthony Smith fought in a main event, he endured a significant loss to Glover Teixeira. Arguably, the loss was the worst of his career, and he looks to put the damage behind him with this upcoming bout.

Smith could put that loss in the rear view mirror if he can capitalize on the rising star that is Aleksandar Rakic and put himself on the right track in the Light Heavyweight division.

Aleksandar Rakic can use the promotion to the main event to make a statement that his spilt decision loss to Volkan Oezdemir was a stumble, and a learning experience in his blossoming UFC career. A win against Smith would certainly do that, and revive his path to title contention.

The styles of Smith and Rakic should lead to an exciting match-up. Who do you see walking out of the the UFC APEX on August 29 with the victory? Sound off below! 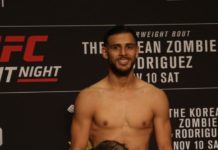 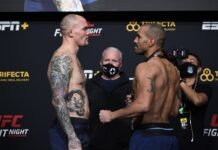