For those wanting to see Maki Pitolo at welterweight, pump the brakes. The Contender Series alum, looking for his second straight win this weekend at UFC Vegas 6, has big plans for 185lbs.

Where he’ll be this weekend is at the UFC Apex, sans crowd. “I miss the crowd. I miss having the crowd out there, I miss the vibes they give out,” Pitolo admitted. “The boos, the cheers, when they see action, they’re cheering louder and louder. That’s what I miss the most. Going out there and having no crowd, it just feels like a big sparring session to me. I really wish they were there.”

There’s a bit of nostalgia in the air at the Apex, however. The UFC’s own arena/production facility, it’s been home to Pitolo’s biggest successes. 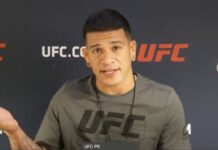 UFC Vegas 8: With So Much Negative in the World, Maki Pitolo Looking to Give a Little Smile to Fans