Chris Weidman has lost 5 of his last 6 fights. Weidman’s last trip to the cage, and his first time in the UFC at light heavyweight, ended disastrously when he was KO’d by Dominick Reyes in the first round of their bout last October. Weidman, who recently turned 36 years old, stands at 6’2″ tall and has a 78″ reach. After going on a skid in the middleweight division that saw him lose 4 out of 5 fights Weidman decided to try his hand in the light heavyweight division 20lbs up.  Chris has faced nothing but high-level competition while at 185lbs and in the past, other middleweights like Thiago Santos and Anthony Smith have immediately fared well after moving up to 205lbs. Unfortunately, that wasn’t the case for Weidman and it looks as if another fight at light heavyweight isn’t in the cards of a little while.

At UFC Vegas 6 Chris Weidman will return to the middleweight division, where he was a champion just 5 years ago, to try and get back in the win column. 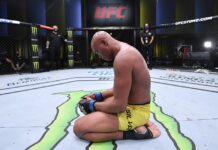 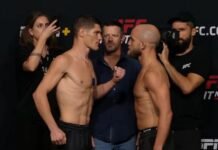