A three round middleweight main event originally booked as the night’s co-feature topped UFC Vegas 5 on Saturday. But for all the weirdness leading up to the card — fights falling through and a small army of last minute replacements — Edmen Shahbazyan vs. Derek Brunson remained intriguing.

In reality, booking the 22-year-old against the veteran Brunson was giving him a step up, and a test to see if he was ready for bigger things. How he performed Saturday would no doubt determine whether he went on the fast track to the top at 185lbs, or if the promotion would opt to reign him in a little.

Derek Brunson started the fight with a long left straight that was deflected. Edmen Shahbazyan came back with a body shot, then another. Brunson fired a body kick that was briefly caught and Shahbazyan was hunting for his body. A right hook found the mark for Shahbazyan and Brunson came back with a kick. A body head combination with the left hand landed for Shahbazyan, then Brunson blitzed in with a big straight punch and shot for a takedown. Shahbazyan dropped a few elbows, but he was dumped to the canvas by Brunson. Shahbazyan started to turn, allowing Brunson to take his back momentarily. Shahbazyan worked his way up, eating a punch on the way there, then began firing heavy shots at Brunson. Brunson landed another takedown before the round came to a close, but after they returned to the feet, he was caught by a big elbow.

Punches landed simultaneously for both fighters to start the second with Shahbazyan going to the body and Brunson to the head. Brunson was able to secure another takedown, but Shahbazyan popped right back up. Right before firing a right hand, Brunson poked Shahbazyan in the eye with an extended hand. Action paused briefly as Shahbazyan refused to see the ringside doctor. Shahbazyan landed a huge body kick, then Brunson turned things around with a takedown attempt against the cage. He let it go and landed a few big hooks, then a knee. Brunson went back to the clinch, then landed a slick trip takedown. He smoothly slid into mount, then dropped bombs on Shahbazyan. With little time left, Brunson postured up and hit him with a series of huge shots. Shahbazyan was in rough shape in between rounds, but he was cleared fight in the third and final round.

Brunson popped him with a left hand to start the final round and Shahbazyan was simply out of it. Brunson dragged him down, then only a few punches were needed before Herb Dean stopped the fight. A huge win for Brunson, who is now 3-0 after moving to Henri Hooft’s gym.

Derek Brunson def. Edmen Shahbazyan by TKO (Punches) in Round 3 (0:26) 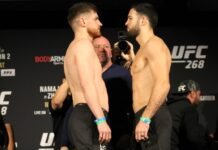 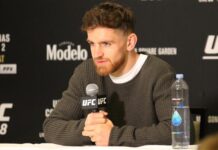