MMA is a sport full of colorful personalities. But not everyone can be a Chael Sonnen, Rampage Jackson, or Conor McGregor. For every Darren Till, quite frankly, there’s a Tom Aspinall. And that’s fine. Let’s be honest, one Darren Till suits us just fine.

Apinall and Till, teammates at Team Kaobon in Liverpool, England, both appeared at UFC Fight Island 3 on Saturday. While things didn’t go Till’s way in the main event, earlier in the night, Aspinall made his octagon debut in style. That, thanks to a bonus-winning knockout of Jake Collier, a former middleweight turned heavyweight.

“It just went as planned to be honest. I knew he was a little bit sloppy with his strikes, and I’m a dangerous striker,” Aspinall (8-2) told Cageside Press following the bout. “So any time you’re going to be sloppy and stuff like that with me, you’re going to get caught.”

Speaking on his friendship with Till, Aspinall said that “me and Darren have been friends and teammates, we’ve been teammates for a long time. So great to be on the same card as Darren.”

That said, it wasn’t Till behind Aspinall’s call-out of Sergey Spivak following the bout.

“No no no, I’m a nice guy, I respect all the guys in my division,” the British heavyweight exclaimed. “I respect Spivak, I want to test myself against him. That’s it, nothing personal, I think he’s a very good opponent.”

So no Darren Till-style social media game, then? Say it ain’t so! 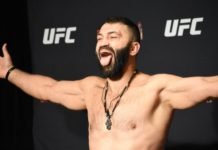 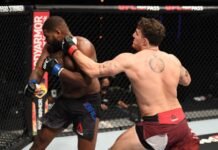