While Bellator’s return to action goes down Friday, it has begun to assemble its next date. In addition to the previously reported pairing of Michael Chandler vs. Benson Henderson, Bellator 243 now has a big heavyweight fight on its hands: Matt Mitrione vs. Tim Johnson.

The UFC veterans have both found mixed results since moving to Bellator’s heavyweight division.

However, after being smothered by Ryan Bader in the heavyweight grand prix, Mitrione saw a fight with Sergei Kharitonov end in a no contest, after “Meathead” landed a painful-looking low blow on the Strikeforce veteran. A rematch ensued, ending in a TKO victory for Kharitonov in August last year.

Johnson (13-6) left the UFC off a win only to suffer defeat in his first to Bellator bouts, to Cheick Kongo and former champ Vitaly Minakov. However, earlier this year at Bellator 239, Johnson knocked out the previously undefeated Tyrell Fortune within a round, instantly putting himself back on the radar.

Bellator 243 is set to take place August 7 at the Mohegan Sun Arena in Uncasville, CT. 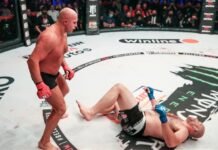