On July 25 for UFC Fight Island 3, the promotion is seemingly pulling out all the stops, with a 15 fight card that features plenty of fighters that know how to finish fights in exciting fashion.

Robert Whittaker made one of the best decisions of his career to move up in weight to the middleweight division. It has seemingly made his striking even more powerful. Whittaker’s run to the title at 185lbs was one of the most interesting in recent memory, as he finished 4 of his 6 opponents on his way to the vacant UFC middleweight title. Robert has some truly beautiful striking techniques and he mixes together his punches and kicks so well that often times his opponents have no idea where the next strike is coming from. Whittaker is a fan favorite to watch and posses the ability to end the fight, no matter the round. The Australian has also shown extreme toughness in his fights and the ability to pick his shot perfectly, especially in his two bouts with Yoel Romero.

Robert Whittaker stagger Ronaldo "Jacare" Souza with a head kick and follows up to finish a flawless performance (u/BestSinceDay0) pic.twitter.com/7LH9ScdE14 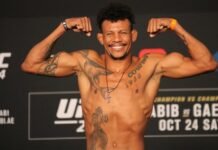