When Bellator MMA returns to the Mohegan Sun Arena next month, top prospect Taylor Johnson will be making his promotional debut. Johnson has been added to Bellator 243 in a middleweight bout against Joel Bauman. A source familiar with the booking confirmed the fight to Cageside Press, on condition of anonymity as the promotion has not yet announced the fight.

Johnson (5-1) was an undefeated talent when he entered Dana White’s Contender Series last year. The California native went up against André Muniz, but lost via rear-naked choke in the opening round, taking his first professional loss as a result.

Prior to that, Johnson, who turned pro in 2016, had spent the bulk of his career under the Legacy Fighting Alliance banner, first appearing at LFA 11. All five of his wins as a pro have come via stoppage.

Bauman (3-1) made his own Bellator MMA debut last year at Bellator 224. Also an LFA veteran, he came up short against Jordan Young that night.

Bellator 243 is expected to be headlined by a rematch between Michael Chandler and Benson Henderson. The pair first met in 2016, with Chandler earning a split decision win. Also booked for next month’s event, heavyweight action between two former UFC veterans in Tim Johnson and Matt Mitrione. Bellator 243 is set to take place August 7, 2020 — two weeks from the promotion’s return to action at the very same venue this Friday night. 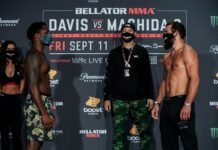