Aaron Pico is a name known around the fight world. A prospect who was named the latest and greatest thing in the sport of MMA within just his first few fights. Even before his debut. Yet he stumbled out of the gate. Took some lumps and bumps along the way, as he puts it. Still, ahead of Bellator 242, Pico believes he has grown as a fighter. The losses he faced were a blessing in disguise in his eyes.

“The losses used to eat at me up big time,” Pico (5-3) admitted during this week’s media day, for Bellator’s first show back since the coronavirus pandemic hit. Speaking to media outlets including Cageside Press, he added that “I used to be so pissed that I lost.”

Pico believes his full time move to the infamous Jackson-Wink MMA has not only helped him as a fighter but has helped his IQ grow through the roof as well. Pico doesn’t feel that knockouts are a necessity in wins, even if the fans love them.

“Really good knockouts are awesome, the fans love them, but at the end of the day, I gotta do what’s best for me in my career,” Pico explained. “Of course there’s risks in anything we do, but I really want to be smart in my fighting career. I’ve taken some lumps along the way and I’ve had to learn very very quick at a young age that yeah, knockouts are cool, but winning is the most important thing.” That was instilled in Pico by his coaches, including Greg Jackson.

Pico is set to face Solo Hatley Jr. who is coming off of a split decision victory over Gaston Bolanos. Hatley is on a two fight winning streak and has won 8 of his 10 professional fights.

“He’s a good wrestler. He takes people down. A lot of guys I fight forget I was a world champ in wrestling” Pico told the media. “Three world medals, alternate for Olympic team in 2019, so I think I know how to wrestle.”

While Pico knows his wrestling background will be a strong suit coming into this fight, he has nothing but respect for Hatley’s skills.

“He’s 8-2, he’s got a better record than me,” Pico explained. “He’s a tough guy with some power, I’m not taking him lightly. I’ve prepared for this.”

Pico is ready to get back in the cage this Friday night, but admits he will miss one of the most important pieces of his life during fight week, his horses. Pico has two horses which he spends nearly all of his free time with.

“Canelo is good. I have two now, Corleone and Canelo. They’re spoiled.” 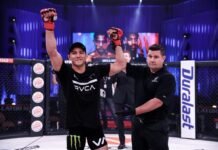