The middleweight title bout between Israel Adesanya and Paulo Costa is official for UFC 253 on September 19 via multiple reports.

The long-awaited middleweight title clash between Israel Adesanya and Paulo Costa is being reported as official for September 19 by Brazilian outlet Combate.  ESPN later confirmed the news. The fight marks the first time since UFC 98 back in 2009 that two undefeated fighters have competed for the world championship.  Fans have clamored for a fight between the two since as Costa has been present for two of Adesanya’s previous bouts to stoke the flames of their rivalry.

Israel “The Last Stylebender” Adesanya has transitioned from a decorated kickboxer into one of the most popular fighters in mixed martial arts today.  After a slow start to his UFC career, Adesanya had a breakout year in 2019 with victories over Anderson Silva, Kelvin Gastelum in the Fight of the Year, and Robert Whittaker to win the title.  After his first title defense against Yoel Romero in March, Adesanya made it clear that his sights were still set on removing the Brazilian contender from the ranks of the unbeaten. One of the most popular fighters on the roster, Adesanya was also recently announced as one of the two cover athletes for the upcoming UFC video game.

Paulo “The Eraser” Costa has been vocal about a fight with Adesanya since 2018 when he competed the same weekend as the New Zealander during International Fight Week.  Though only five fights into his UFC career, Costa has become one of the biggest stars in the middleweight division with brutal stoppages over former champion Johnny Hendricks and Uriah Hall on his resume.  Last August, he overcame Yoel Romero himself in a Fight of the Year candidate to secure his spot as the next challenger for the title.  The fight was originally planned for earlier this year, but a bicep injury to Costa prevented him from taking the bout.

A location for the bout has not been determined, likely due to the UFC evaluating whether or not they will be able to have Adesanya and Costa travel to the UFC Apex in Las Vegas or if they will need to hold the fight in Abu Dhabi as is expected. 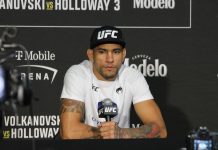 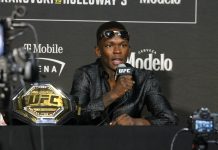