Amir Albazi picked up the first finish of the night at UFC Fight Island 2, submitting Malcolm Gordon with a triangle choke.

In a battle of promotional newcomers at UFC Fight Island 2, Malcolm Gordon and Amir Albazi faced off in preliminary card action. The bantamweight pair (normally competing at flyweight, mind you) had both found considerable success on the regional scene.

Albazi, 12-1 to start the night, had fought for Bellator in the past, and more recently Brave CF. His lone loss as a pro had come to former UFC flyweight Jose “Shorty” Torres. Canada’s Malcolm Gordon, meanwhile, had won four straight, and served a TKO flyweight champion.

Both men were just trading shots for the first half of the opening round. Both were landing quite evenly before Albazi scored an easy single-leg takedown. That set up the finish. From there, Albazi soon transitioned into the mount. Gordon would reverse on top but right into a triangle from Albazi. It was tight forcing Gordon to tap.

Post-fight, Albazi said he’d be opened to a quick turn around. And that the triangle was something that he’d been working on since he was a teenager. An impressive debut from “The Prince.” 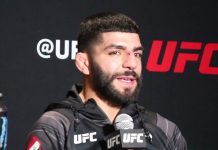