The reveal for UFC 4 has come and gone, leaving MMA gaming fans with a sense of excitement. The trailer, with a remix of the classic The Who song “Baba O’Riley” was enough to get fans, myself included, amped up to pre-order.

There was a ton of speculation leading up to the reveal on who the fighters were that would grace the cover, but on July 11 we were lucky to find out it would be Jorge Masvidal and Israel Adesanya.

Some fans might have been disappointed with EA’s decision on the cover fighters, but what better way to roll out the cool new Backyard and Kumite environments with Masvidal and Adesanya. These two new environments envoke something of wonder that the older versions of the game didn’t have.

The tagline since the reveal has been “Shape Your Legend,” and it seems EA has worked hard on overhauling the Career Mode, even adding ways to develop fighters’ backstories. Personally, I feel this is what fans of the series have been really wanting: a deeper Career Mode. It’s nice to see EA taking notes from their customers and implementing a way that fans can put their personal fighter together and have a longer career based on the decisions a player makes.

Who Will Be On The Roster?

When it comes to who will be on the roster, only four fighters have been revealed on the official EA UFC page. So far the pre-order features boxers Tyson Fury and Anthony Joshua and the two UFC cover fighters Jorge Masvidal and Israel Adesanya. The beta version has several welterweight favourites like Kamaru Usman, Colby Covington, Leon Edwards, Tyron Woodley, Nate Diaz, Demian Maia, Conor McGregor, Stephen Thompson, Gilbert Burns, and Donald Cerrone. But if you paid attention before the tail of the tapes were shown at UFC 251, you got a sneak peak at some more fighters like Jose Aldo, Petr Yan, and Max Holloway.

Being one of the lucky people to play the beta and compare it to past experiences, I am excited to see what EA has offered with UFC 4. That said, it is a beta, and I know full well that it will be more a polished final product released on August 14.

Among other changes: the removal of Ultimate Team mode, which EA Sports explained recently. Not to mention an overhaul of the takedown system, and a more refined clinch control setup.

What excites you now that we know more about the game? Is it the in-depth Career Mode, a more refined clinch control, the whole takedown overhaul, or the new environments you can take your fight to (including The Kumite, The Backyard, and the UFC APEX)? Let us know in the comments! 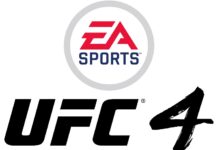