The UFC women’s bantamweight meeting between Ketlen Vieiera and Yana Kunitskaya, originally planned for August 1, has been pushed back a week.

MyMMANews was first to report that the fight had been moved from its initial date to August 8. The places the pairing on the Fight Night card headlined by heavyweights Derrick Lewis and Aleksei Olienik.

Kunitskaya (12-5, 1NC) will be looking to bounce back from a TKO loss suffered at the hands of Aspen Ladd back in December. That defeat snapped a two-fight win streak for “Foxy.”

Vieira (10-1) will be looking to get back in the win column as well. She suffered the first loss of her career last time out, against Irene Aldana.

No official event name or numbering has been announced for the promotion’s August 8 card. However, following four shows in July on “Fight Island” (Yas Island, Abu Dhabi), it is anticipated that the UFC will return home to Las Vegas, NV — meaning the event is most likely to be held at their own Vegas-based facility, the UFC Apex.

The August 8 card boasts the following in terms of fights: 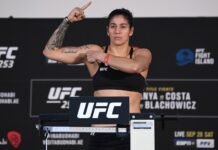 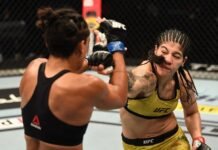