Benoit missed weight for his fight against Ashkan Mokhatarian in 2017. Benoit might have been able to finish his opponent in the third round with a spectacular head kick, but weighing in at 129lbs really put a damper on things. And missing weight probably kept him out of the fight performance bonus conversation for that night. Ryan is 5’5, has a 68.5″ reach and is now 30 years old.

After that fight, fans didn’t see Benoit in the octagon for over two years, before he returned last December, but this time at 135lbs. Unfortunately for Ryan, he lost a split decision to Heili Alateng in his debut at bantamweight. But Benoit will look to will look to get back in the win column at flyweight, and now in the co-main event slot, on July 15th. 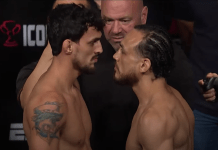