Four days after a prestigious UFC 251 card the UFC is back to Fight Island, this time on a Wednesday. The UFC on ESPN 13 card is headlined by a featherweight bout in Dan Ige and Calvin Kattar in a fight with important title complications.

Lower on the card a few debuting fighters will be seen walking into the UFC cage for the first time. On the main card, the return of the exciting Abdul Razak Alhassan (10-1 MMA, 4-1 UFC) will see him fight for the first time since September 2018. He will welcome newcomer Mounir Lazzez to the UFC.

How will Lazzez fare in the UFC:

Mounir Lazzez hasn’t really proven to be UFC ready, only beating guys he’s expected to beat. In fact, in his only real test he lost to Eldar Eldarov. However in Lazzez’s defense, Eldarov is an outstanding wrestler and prospect.

That said, Lazzez is still an exciting fighter and has a nice set of skills. He’s finished all but one of his wins and it has been from ground and pound, punches, knees, and head kicks. At times Lazzez will shoot for a takedown and he nearly capitalizes every time. He does have good ground and pound but as far as a grappler he doesn’t have much to offer.

On the feet is where Mounir Lazzez wants to be. Nicknamed “The Sniper” that’s exactly what he is — firing fight-ending strikes the entire time. You’ll see Lazzez fight behind his kicks as he likes to throw his front kick; he also has a deadly roundhouse kick he’s scored two knockouts with. Lazzez is extremely quick when firing off his kicks, not showing any sign of when and where he’s going to chop you at. From a striking standpoint, he’s just as good. Lazzez is a tall rangy fighter and uses his length very well from the outside. He throws a really good jab. He uses a lot of feints as well to draw his opponent off to land those bigger shots.

Lazzez likes to incorporate knees into his skill set. Whether it’s him throwing knees in the clinch or taking to the air with them. Where he will fall short is his takedown defense. He’s taken down quite easily and has been taken down by some pretty low-level fighters. Once on his back, Lazzez isn’t too good at working his way back to his feet. I like the signing and he will most likely produce some firefights and explosive finishes. I don’t think he will reach the top 15 but he may get that Niko Price fan-favorite look.

How he matches up with Alhassan:

Alhassan is arguably the most exciting fighter right now in the welterweight division. These guys will meet center cage and start throwing heavy artillery from the start to when the fight is called off. Past opponents of Alhassan in the UFC have made the mistake brawling with him. With his explosiveness, power, and chin he has put guys to sleep.

Lazzez is another fighter who will stand toe-to-toe with Alhassan to see who drops first. Unlike any of his other opponents, Alhassan will be fighting someone who utilizes kicks like Lazzez does. Coming into this fight Lazzez will have a five-inch height advantage as well as a six-inch reach advantage and is someone who uses his range well. I’m thinking as this will probably be a firefight; this is the most dangerous striker Lazzez has fought. Alhassan has fought and knocked out past and present UFC athletes like Niko Price and Sabah Homasi. The pick is Alhassan but I’m not counting out Lazzez at all. 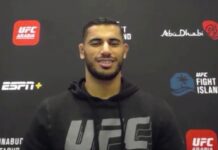