Missing weight is something no fighter ever wants to do. To many, making weight is actually the job. Or at least the fight before the fight. So Raulian Paiva was none too happy when he missed weight for UFC 251.

The flyweight came in 3lbs over for his bout with promotional newcomer Zhalgas Zhumagulov. Injury was added to insult when Paiva (20-3) connected low during the fight. But in the end, he walked away with the unanimous decision win — his second straight victory inside the octagon.

After the fight, Paiva told Cageside Press that missing weight did have him consider a change in divisions. But ultimately, given the circumstances, he’s decided to stick with flyweight for the time being.

“There were a lot of factors coming into this,” he observed, speaking via teleconference backstage in Abu Dhabi. “I was a little bit heavier than usual when I got offered the fight, but we did the math and it looked like it was doable.” Heading into Saturday’s card, Paiva estimated that he lost nearly 20kg. “So it’s a lot, but everything was going all right. But we didn’t really know how much the quarantine was gonna affect me. And there were like three days in San Paulo, where I was by myself in my hotel room room, I was trying to train by myself. Then we traveled here and then another two days by myself. So you know, that’s five days without training property. And when you have a weight cut as tough as mine, that really adds up.”

Ahead of the fight, one of Paiva’s coaches had tested positive for COVID-19, adding another wrinkle. “I didn’t have my coaches with me to help push me when it really came time to do that final push. And I just couldn’t make it. I was still about a kilo and change, a kilo and 300 grams over. You know, I really apologize about that. But I did all I could.”

All that led to the Brazilian questioning whether flyweight was the right move.

“When I had to stop the weight cut, it really crossed my mind that I might be better off fighting at bantamweight,” Paiva admitted. “But after some thinking and talking to some people, I realized that you know you can’t really take this fight and this weight cut as something to make a decision on. There was so many factors, so much stuff that didn’t go as it should have. So it’s really tough to to choose to move up a weight class class based on this.”

Instead, the 14th ranked flyweight is hoping to land an opponent ahead of him. “Hopefully I can get someone ranked higher than me, maybe a top 10.” 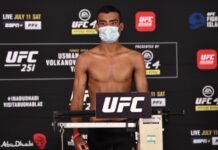 Raulian Paiva vs. David Dvorak Set For May 22 UFC Event