Amanda Ribas picked up a quick submission win over Paige VanZant to open up the UFC 251 pay-per-view (PPV).

UFC 251 offered a fight, not a popularity contest. But there’s no denying the following that Paige VanZant brings with her where ever she goes. Which meant a lot of eyes were on the UFC 251 PPV opener. Add to that the fact that VanZant was fighting out her UFC deal — and had been vocal about being underpaid as a fighter. Making more off her Instagram account than as a UFC athlete, in fact.

That’s all you needed as a storyline Saturday on Fight Island, when it came to PVZ. She’d be motivated to put on a show, to secure herself a bigger payday, either within the UFC or outside it. Opponent Amanda Ribas, a bubbly personality with a growing following herself, was hoping to capitalize on the biggest-named opponent of her career, meanwhile. With an eye on breaking into the mainstream perhaps. Not to mention, Ribas was looking for her fourth straight UFC win in the flyweight battle — which the strawweight was moving up for.

The first round started off with a leg kick from Ribas. Ribas lands some nice knees to the body inside the clinch and gets the trip takedown into side control against the cage. After a scramble Ribas locks in an armbar and VanZant had no choice but to tap out. 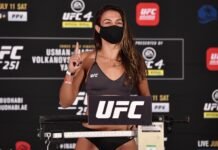