This is not the first time Jessica Andrade has trained for Rose Namajunas, obviously.

In fact, it’s not even the second. The pair first met in 2019, a fight in which Namajunas dominated the first round. But a second-round slam ended Namajunas’ night, and won Andrade the UFC strawweight championship.

The duo seemed destined to cross paths again. That will happen at UFC 251. But the fight was supposed to come sooner, at UFC 249 in Brooklyn. Before the coronavirus pandemic hit, and pushed that event back.

“I actually didn’t have to retrain. I just kind of continued doing what I was doing,” Andrade explained to Cageside Press ahead of their rematch this weekend. “But I was able to have a little break. Get some food. Get something to eat. And then I had actually more time to look at what I needed to do for this fight.”

“It ended up being great for me, because I had enough time to really assess what I needed to do,” she added.

After their first meeting, there was a lot of talk about Rose’s performance in that first round. But Andrade doesn’t feel she needs to prove she’s the better fighter. “I think it’s really about getting a win right now,” she told us. “We don’t have to prove anything to anyone. We already proved we’re tough enough, every time we step in there.”

“It’s really just about coming out and having a victory, because that’s what’s really good.” Plus, a win could put her back in the mix for a shot at Weili Zhang.

“That’s obviously what we want. We want to go and fight for the belt,” said Andrade. “I really think that whoever wins this fight is going to be in pretty good position to do that. Who knows, maybe winning this fight, I could be fighting for the belt sometime soon.” 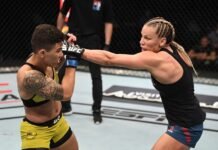 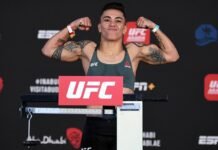