Emily Ducote and Juliana Lima had the honor of headlining Invicta FC’s first event back in the wake of the coronavirus pandemic.

Invicta FC 40 went down Thursday night, a rare weeknight how ahead of Independence Day in the United States. The card, held at the Memorial Hall in Kansas City, Kansas was something of an abbreviated affair — only five fights in total. Six had originally been scheduled, however a medical issue that arose during TUF alum DeAnna Bennett‘s weight cut saw her fight against Victoria Leonardo removed from the card.

That left the strawweight mean event, and four more bouts, to tide fight fans over. Among them, the return of Lindsey VanZandt, a 7-3 atomweight who had fought for both Bellator and RIZIN. With wins over Bi Nguyen and Rena Kubota (the pair’s career series is split at two fights apiece), her focus was to become the best atomweight in the world moving forward.

Her first obsctacle, Alesha Zappitella, who was 3-1 under the Invicta FC banner to date.

In the main event, meanwhile, Ducote, a former Bellator MMA title challenger at flyweight, looked to bounce back after a losing effort to claim Invicta’s strawweight title last time out. Juliana Lima, for her part, was making her return to the Invicta cage for the first time since 2013. She’d lost her last two fights in the UFC, and was hoping to turn things around, and perhaps earn another shot at the big show.

Just as Thursday’s action was about to kick off, with strawweight action between Genia Goodin and Shelby Koren — out went the lights. Seems the Memorial Hall in Kansas City lost power. Invicta FC, just too hot to handle!

Hard to imagine what the fighters went through, as they were already in the cage and ready to get underway. A short delay, the the actually finally did get going. Goodin opened with a kick, and turned up the heat striking, which led to an immediate takedown attempt by Koren. Koren looked like a spider-money, and pulled her opponent down. Goodin tried a slam while Koren was looking for an arm-bar attempt. Goodin later tried for an arm-bar of her own. Back on the feet, Koren would attempt a guillotine, but with her back to the fence, it was an awkward position. Showing tremendous flexibility, she snaked a leg around her opponent, trying to transition to the back. They’d go to the ground again, Koren throwing up a triangle that looked tight. She stayed on that while attacking an arm as well. Closer, but no cigar. At least once in the round, it looked like Goodin’s arm popped.

In the second, an early clinch led to a hip toss from Koren, but a scramble on the ground led to Goodin getting the upper hand briefly. Moving back to the feet, Koren initiated the attacks, with Goodin countering. With Goodin holding the reach advantage, Koren struggled to work her way inside. Instead, Goodin was able to get her opponent down, and unleash a bit of ground n’ pound. Koren would go after an arm-bar again at the end of the round, but the bell would halt that attempt.

Genia Goodin opened the third with a leg kick, and the pair traded punches. In a clinch along the fence, Koren would look for a hip toss, and again threaten to take the back. The pair exchanged some knees, with Koren’s looking a little harder. Between rounds, under the open scoring system used in Kansas, the judges had it at one round a piece. Whoever went hard in the third was going to take it. Most of the third played out on the feet, and it was close going to the scorecards. Goodin, with the height and reach advantage, may have had a slim lead — and the judges saw it that way in the end.

In flyweight action, Laura Gallardo looked for a takedown early in the night’s second fight. Cicero would fight her off, but Gallardo’s second attempt was more successful. Cicero scooted back to the fence, but Gallardo stayed right on her. Cicero would, however, wall-walk up. Once she found a little space, she’d let her jab then a combination go. Gallardo soon dropped for a single leg, and in a repeat of the first takedown, Trisha Cicero scooted back to the fence immediately. Again, she wall-walked back up, both takedown sequences turning into a mirror image of one another. On the feet, Cicero appeared the more comfortable of the two. She moved in-and-out well, jab working from time to time. Gallardo moved in with a flurry, but with less precision.

In round two, Cicero worked her jab, fought off a clinch, and showed solid movement and boxing skills. Cicero landed a hard leg kick, getting Gallardo’s attention. Gallardo would shoot in for a single-leg takedown moments later, landing it. Again, Cicero scooted back to the fence. With over half the round remaining, Gallardo had lots of time to work. Cicero, however, powered up, and broke free of her opponent. She’d touch Gallardo with a leg kick, stay moving, and work her jab and 1-2s. More leg kicks as well, to the inside of Gallardo’s leg, throwing her off-balance. Gallardo, however, would land a takedown in the final seconds of the framel.

Round three saw Cicero fighting off a takedown about ninety seconds in, which could be key. She had the advantage on the feet after all, and her inside leg kicks were having an effect on Gallardo. Despite her wrestling being a difference maker, Gallardo seemed resigned to fight a stand-up battle through much of the third round. She finally went for a clinch in the final minute of the round, but Cicero was able to fight off the attempt, break free, and get back to distance. Gallardo would then shoot for a bit of a sloppy single leg, only for Cicero to break free. That would happen again in the dying seconds, with Cicero again fighting off the attempt.

A rare featherweight treat at Invicta FC 40 saw Chelsea Chandler make short work of Liv Parker. Early on, a liver shot by Chander nearly folded Parker over. A left straight followed by a hook dropped Parker moments later. Parker somehow survived, but not for long. Chelsea got right on her back, sinking in the rear-naked choke and flattening Parker out. The tap came in short order.

Lots of movement early in the atomweight co-main event, as expected with a pair of 105lb women. “Half Pint” Zappitella landed an early takedown, getting into half-guard. She briefly passed to side control before VanZandt reclaimed guard then flashed an upkick before breaking free. It wasn’t long before VanZandt was on her back again, after trying a kick. And this time, Zappitella was able to work from side control, landing a knee to the body and adding short elbows. VanZandt would scramble free at the end of the round, and launch a kick in the final seconds — but Zappitella’s wrestling was dominant.

Round two had Zappitella on the outside, with VanZandt hunting her, flashing her jab. Mixing it up, VanZandt changed levels for a takedown, but that was easily fought off. Zappitella’s own shot was not, and in the opening minute she had VanZandt on her back. A bit of a scramble, and Alesha Zapitella was once again in side control. She’d manage to land some big shots from the top before VanZandt escaped up. But while she was dangerous on the feet (see: spinning hook kick), she was soon back down, off a kick once again. In the final minute of the frame, VanZandt landed a hard leg kick, and a nasty right hand. She sprawled to elude a takedown, as Zappitella clearly got a taste of VanZandt’s power. There’s be a bit of a scramble to the end.

Down on two judge’s scorecards, VanZandt was more than likely going to need a finish. Instead, she wound up back on the ground, scrambling with Alesha Zapitella. While VanZandt wasn’t totally dominated, Zapitella was soon able to regain control. VanZandt threatened with an upkick, but could not escape. She would finally regain her feet in the final 30 seconds, and went back on the offensive. VanZandt fired a high kick, and later a knee on a takedown attempt by Zappitella. Moments later, a jump knee. But VanZandt found herself on her back in the final 30 seconds, which likely sealed the deal, if there was any question, for Alesha Zappitella. Although apparently, for one judge, there was. Regardless, a solid fight, and solid effort by both athletes.

Lima opened with some leg kicks, and stayed mobile on the outside. Ducote put a little more behind her early strikes, pressing forward with a flurry. Lima attempted to close the distance for a clinch, but Ducote avoided that. A good amount of back-and-forth, and good pace to the first half of the round. Lima would fire a left, and follow up with more strikes. Ducote backpedaled, and Lima followed — only to be reversed against the fence. Lima would land some nasty knees from that position before the break however. In the final minute, Lima worked her jab, the pair exchanged kicks, and they remained active right to the bell.

Lima landed early in the second round. Her output was higher, though Ducote appeared to have the edge in power. Ducote would try to clinch; after a bit of a struggle, the pair separated. Lima fired off kicks to the legs and body; Ducote then took to walking the Brazilian down. Lima used her jab and 1-2 combo to keep her opponent at range, at least until the American closed the distance and pressed Lima into the fence. That didn’t last, and the pair returned to open space. With just over a minute remaining in the second round, Ducote finally shot for a takedown — and landed it. Ducote moved to side control, then mount, landing a number of elbows before Lima regained guard. She’d escape to her feet for the final few seconds.

The third and final round of saw an opportunity for either fighter to step up. Under the Kansas open scoring system, both corners knew it was one round each on all three judge’s scorecards. Ducote worked on her kicks and brought the fight to Lima. Lima was leaking blood from under one eye, care of one of those elbows in round two. Shockingly, after it arguably won her the round in the second, Ducote didn’t go back to her wrestling until the final minute — when she landed an attempt that was short lived, with Ducote essentially allowing her opponent back up. Lima then shot for a takedown of her own, but Ducote pulled free. That took them to the final bell. 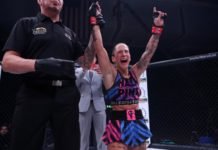 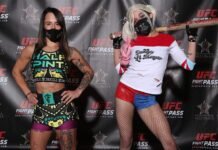