The UFC is once again returning to its Apex arena this weekend, for the fifth straight card. This time out, the show is headlined by Dan Hooker and Dustin Poitier in an important lightweight bout. Other notable fighters on the card are Mike Perry, Gian Villante, Mickey Gall, and Luis Pena.

In a welterweight bout, Takashi Sato (15-3 MMA, 2-1 UFC) is looking to bounce back after a loss to Belal Muhammad. He was originally supposed to take on the debuting Ramiz Brahimaj. Ramiz though had to pull out due to one of his cornermen testing positive for COVID-19. Now Sato will welcome another newcomer in Jason Witt.

How will Witt fare in the UFC:

Jason Witt is mainly a wrestler but he does have some good tendencies on the feet. He has some heavy leg kicks but don’t use them nearly enough. He also has some good hands but isn’t consistent with his output and accuracy.

On the other hand Witt will plow his way forward for a power double leg. Witt is a very physical guy just bullying his way forward, changing levels, and dumping guys on their back. He will no doubt shoot from the outside and although it can be a bit telegraphed he does a good job pushing forward. On the mat, Witt isn’t the best with top control letting guys get back to their feet too much, which is one reason he gets so many takedowns in his fights. He does move pretty well on the mat immediately passing guard. Witt holds eight submissions but I don’t think that will be much of a factor in the UFC.

While Witt does have a usual wrestle-heavy gameplay his cardio diminishes over time. His head sits on that center line when he comes forward. He’s easily hit and has been dropped numerous times in his career. I do think this a good signing, given Witt has put his time in on the regional scene. He probably gets a few wins in the UFC but how much of an impact he can make is questionable.

How Witt matches up with Sato:

On the feet, Takashi Sato is the much more proven fighter. Sato doesn’t throw a lot of output but is accurate in what he throws. The Japanese fighter isn’t a huge threat on the feet but overall has a striking advantage over Witt. For his part, Witt will no doubt try to wrestle but from there that may be all he can do in this one. He probably won’t produce much offense on the mat nor do I think he will hold Sato down. Witt may have a pretty good round one but round two and three I’d imagine Sato taking over. And with Witt taking this fight on 48 hours notice I don’t expect him to be conditioned to go three rounds. Which makes an early finish key to his fortunes. 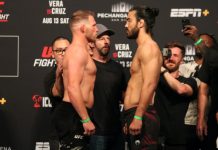