Dustin Poirier’s last trip to the octagon did not go the way he’d hoped. In a title unification bout last September at UFC 242, against the ever-dangerous Khabib Nurmagmomedov, Poirier came up short.

He returns to action against a very different fighter: Dan Hooker. It’s a bout that has tantalized fans since its booking, being so reminiscent of fights like Poirier vs. Gaethje and Hooker vs. Barboza. Who ever wins or loses, it feels like MMA fans are in for a treat.

Of course, there will be no fans on their feet in the arena Saturday, because there will be no fans. But the match-up is one Poirier has been looking at for a while. As much as there was talk of fights with Conor McGregor and Nate Diaz, Poirier believes the UFC wanted to book him against “The Hangman” ever since Hooker’s win over Paul Felder back in February.

“We were supposed to do it in San Diego, then obviously the pandemic hit, and here were are, doing it in the Apex in Vegas,” Poirier noted. “I’m just excited that it’s happening.”

The dangers Hooker brings to the table, said Poirier, are both physical and mental. “He’s very rangy, long, and a patient fighter. That’s what makes him dangerous.” He knows that he may have to go deep into the fourth or fifth round in this one, he added later. “I don’t try to line myself up with these kind of crazy match-ups. That’s just part of fighting.”

As he does fight in and fight out, Poirier has put together a charity effort for this fight. His foundation, The Good Fight, will be footing the bill for fans watching this weekend’s event at a local restaurant in his home town of Lafayette, LA.

“We were thinking about putting something together last minute. We didn’t have a whole lot of time to prep with the foundation, and to meet with the board of the foundation and get things moving,” Poirier explained. Which means the restaurant effort is just one of several initiatives. Poirier also plans on auctioning off his fight kit, with money also going to local businesses in Lafayette. There’s also a back-to-school drive in the works, plus a Unity 5K run.

“We have a bunch of other stuff in the pipeline. But for this particular Fight Night, from 5 to close at a locally owned restaurant, we’re going to be picking up the tab for everybody’s food there,” he explained. “Just to give back to the local business, and give back to the people of Lafayette, Louisiana. Let them have a free meal, let them come together and talk over something common, talk over fighting, a fighter from that area. It’s just good to bring people together, and to boost the business.”

Watch the full UFC on ESPN 12 media day scrum with Dustin Poirier above. 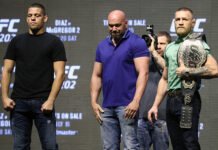 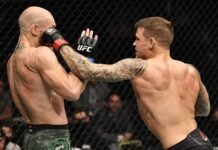