Tate is currently employed by ONE Championship in an executive role, serving as one of the promotion’s Vice Presidents. Nunez remains an active fighter with a record of 7-2, who currently fights for ONE. Aside from bouts in Bellator and the WSOF, he’s best known for two appearances on The Ultimate Fighter.

Speaking to ONE’s official website, Nunez said that “It feels great to be a father, but to bring your own son into this world is a tremendous feeling.”

Tate had recently taken to Instagram to discuss her pregnancy, and criticize the increasingly common practice of relying on c-sections.

“Fun fact, you’re not actually overdue until 2 weeks past the EDD (Estimated Due Date). Only 4% of babies are born on their EDD so clearly it’s not that accurate,” Tate wrote. “I’m ranting but it needs to be said. Hospitals are run like most businesses, to be efficient and to make money.”

Later, she added “The cesarean rate continues to climb globally. In the US above 30%, Singapore 40+%, Brazil 50% some hospitals there as high as 80%! The World Health Organization says it should be around 15%, I think lower even but regardless even 30% is offensive.

“OBGYN Doctors are SURGEONS!! Don’t forget that (many get their degrees and have never attended a live natural birth) or that it’s more convenient for them to schedule you down for a cesarean so they can make their lunch break on time and collect some extra $ too! Not all OBGYNs think this way but it’s important for you to know how your provider feels and acts.

“It’s time women stop being bystanders to their own labor/delivery, to be made to feel powerless or like you don’t know how to birth your baby is a crime.”

Per Nunez’s interview with ONEFC.com, the couple had originally planned for Daxton to be delivered in hospital, but opted for a home birth instead.

Our congratulations to the parents and family, and of course to Daxton — best wishes to all! 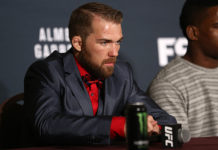