The weight class that has thus far dominated by Valentina Shevchenko has seen the champ line them up and knock them down since she arrived at 125lbs over two years ago. Five straight wins now, three title defenses for Shevchenko. Calvillo (9-1-1), who defeated Jessica Eye in the main event on Saturday, may only need another win to land a fight with the champ. After all, Eye was the number one contender in the division.

Yet speaking to media outlets including Cageside Press following the event, which took place once again at the UFC Apex, Calvillo was a little down on herself.

“I’m always a little bit hard on myself, because I want to get the finish,” she admitted. “But I’ve got to remind myself that I just took out the number one contender in the flyweight division. I guess I should feel great, but I want that finish next time. I understand we had a really short camp, but we’re gonna get it done next time.”

Despite her confidence during fight week, there were some nerves, she later added. “This is my first five round fight,” she pointed out. Yet, while a bit slow out of the gate, Calvillo fought admirably for five rounds. Her cardio held up.

There was another factor as well, however, that contributed to some nervousness. “On top of that, I knew she was going to be huge. She missed weight. To be honest, she didn’t miss weight by .2. She actually missed weight by a lot more, but she held on to the towel when she got on the scale,” Calvillo exclaimed. And according to the flyweight newcomer, she was well aware in advance that Eye would be heavy. While Eye’s official weight was 126.25lbs, Calvillo believes it to have been much more.

“I know this because I received a text message from her coach letting us know she was going to miss weight by 3 and a half pounds, not .2,” Calvillo revealed. “But when she showed up, she held the towel, and got away with that. That’s why she was so proud, after she weighed in, and she was so happy, and she’s like ‘oh I only missed it by 2 points.’ No. So she went into this fight a lot heavier than I did. So not only did I move up a weight class, I got somebody that was a bantamweight going in there, not fighting a flyweight.”

If this all sounds familiar, Daniel Cormier was accused of the same stunt in 2017 at UFC 210 in Buffalo. There was enough merit to the claim that Cormier cheated the weigh-in that the NYSAC changed the wording of its weigh-in procedure, to prohibit fighters on the scale from making physical contact with anything but the scale itself. Not that Cormier was the first — it’s an old wrestling trick.

That said, Calvillo never considered turning down the fight, or holding out for more money. “Absolutely not. I’m a fighter. I’ve missed weight before too, and everybody accepted the fight. I’ve fought people who have missed weight too.”

The difference here, said Calvillo, is that “it’s all about how you carry yourself outside when you miss weight.” She explained that after her own weight miss, she locked herself in her hotel room, in tears. A vast difference from what she observed from Jessica Eye this weekend. “I wasn’t running around f*cking smiling and blah blah blah. It was definitely a different demeanor, but I knew I had to put that behind me.”

Yet while Eye’s reaction to missing weight “wasn’t cool,” Calvillo added “it’s my job. I was going to show up.”

Towel Gate 2 isn’t likely to result in the storm of controversy that Cormier’s towel trick generated, mind you. Mainly because Eye lost, and Calvillo will now move forward at flyweight. An interesting match-up with another former title challenger, Katlyn Chookagian, is a possibility. “Blonde Fighter” expressed her interest Saturday following the fight.

As to how Calvillo felt in the cage at 125lbs, she told Cageside Press on Saturday that she felt as strong as she needed, all things considered.

“Considering everything that was going on, I think that this is the division that I belong [in],” she told us. “I’m going to be able to pick up my strength a little more. I barely got to train for this, and even get prepared. I was in the middle of switching gyms when this pandemic hits. I’m extremely proud that the fighter in me was able to pull this out. Because this is not even the best me that you guys have seen. That’s yet to come.”

Watch the full UFC on ESPN 10 post-fight press conference with Cynthia Calvillo above! 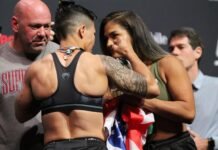 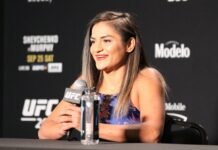