Alex Caceres dominated Chase Hooper on the feet and took the undefeated fighter’s 0 in the process at UFC 250.

Once upon a time, Alex Caceres — better known perhaps as “Bruce Leeroy” — was a young up-and-comer in the UFC. How time flies. Caceres was in the veteran role at UFC 250, where he took on Chase Hooper in the latter’s sophomore outing.

The featherweight fight was the featured prelim ahead of the PPV card. And in the end, it was experience over youth.

“Bruce Leeroy” opened up with a clean left hand, followed by another clean left jab. Hooper looked to land a combination, but missed most of strikes and got hit with a few more clean jabs. Caceres dropped Hooper rather badly after landing a counter, and he let Hooper get up to his feet. Caceres landed a right hand, and Hooper shot in to grapple with Caceres, only for Caceres to shrug him off. Hooper went back in for a takedown and managed to get Caceres’s back. Caceres shrugged him off again and went back to striking at a distance. Caceres landed an uppercut, followed by a head kick. Hooper hopped in with a straight and ate a left hook. Caceres got a takedown of his own to end the round, and Hooper went for a kneebar to end the round but couldn’t get it.

Caceres landed some clean shots to open round two, but Hooper kept the pressure up and got the fight into the clinch. Caceres threw him off and went back to striking, and landed a right hook. Caceres landed another right hook, and Hooper jumped on him and was able to get his back while standing briefly. Caceres shook him off the top, but Hooper jumped back on him to get into the clinch again. Hooper got shook off and looked for a head kick but missed badly. Hooper pulled guard, but Caceres got up quickly. Hooper went to pull guard again, but couldn’t get Caceres down. Caceres went to land some strikes but got tripped by Hooper, and Hooper landed on top. Caceres was able to end the round on the feet, however.

In short, Hooper was getting schooled on the feet, while looking far more comfortable on the ground. However, he struggled to keep the fight there. And Caceres didn’t shy away from occasionally looking to take the fight down himself.

Hooper went to pressure Caceres to start round three and landed two left hands to start. He got the clinch but was unable to get the takedown on Caceres. Hooper threw a kick low that landed on Caceres’ groin, which gave the nonstop action a brief break. Back underway, Caceres landed a clean left hand followed by a low kick. Hooper went to pull guard again, but couldn’t get Caceres down. Caceres started tagging Hooper on the feet, and Hooper went to pull guard again but once again, couldn’t get his opponent down. Hooper finally was able to pull guard with about a minute left in the fight. Caceres landed some good ground and pound, and then stood up. Caceres landed a big combination to send the two to the judge’s scorecards. Where there was really little question.

🥋 @BruceLeeroyGlow is showing his advantage with the hands early. #UFC250 pic.twitter.com/IMhKyN63SU

Hooper showed heart, but Caceres proved to be a case of too much, too soon. 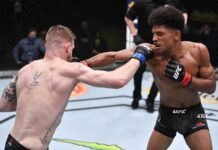 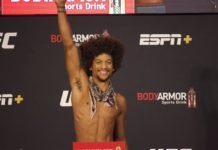