Thursday was a big day for UFC bout news, and especially for UFC 250. The latest addition to the June card is Aljamain Sterling vs. Cory Sandhagen, per a report by MMA Fighting.

Sterling had confirmed signing a bout agreement earlier in the day, without specifying his opponent.

Sterling (18–3) and Sandhagen (12-1) are two of the top bantamweight fighters in the company at the moment.

For his part, Sterling will enter the bout on a four-fight win streak, having picked up victories over Brett Johns, Cody Stamann, Pedro Munhoz, and Jimmie Rivera. He’s long been talked of as a potential title challenger in the UFC’s topsy-turvey 135lb division.

Sandhagen has an even longer streak on the go, having won his last seven fights — dating back prior to his time in the UFC. Last time out, he took home a unanimous decision win against another top contender in Raphael Assuncao.

The UFC bantamweight division is a down-right puzzle at the moment. Dominick Cruz came up short against Henry Cejudo at UFC 249, in a somewhat-controversial finish. Cejudo retired as the reigning 135lb champion following the fight, and unless he can be lured back to competition, the title is vacant.

The winner of Sterling and Sandhagen would be a very good choice to go up against the likes of Petr Yan for the vacant title as a result. Where Cruz, a bigger draw, falls is another question. Then there’s Jose Aldo, who was supposed to fight for the title earlier this month, but lost his shot due to the coronavirus pandemic. 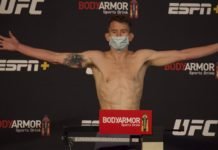