UFC welterweight Miguel Baeza picked up what was unquestionably the biggest win of his career at UFC on ESPN 8 on Saturday. A second-round TKO of “The Immortal” stunned fans, mostly because Baeza was a relatively unknown quality entering into the Jacksonville, Florida-based card.

Fans will likely remember Baeza now. The Contender Series alum moved to 2-0 in the octagon with the win. More importantly, Brown’s status as a veteran bordering on legend in the sport will etch Miguel Baeza’s name into more than a few observer’s memories.

Speaking to Cageside Press following the fight, Baeza (9-0) explained what the win meant to him.

“Coming from the Contender Series, I know a lot of people weren’t behind me getting picked. So being able to beat a veteran like Matt Brown kind of solidified I belong here,” he explained. “So it was a big win. And not only that, but it’s kind of a dream come true to fight a guy like that, that I have been watching for so long. And win.”

“I was in high school when he was fighting,” Baeza later added, when asked if Brown was someone he watched while coming up in the sport.

Baeza was undefeated entering the night. He’s won his first bout in the UFC. Still, there was a fair difference between his sophomore octagon outing, and his debut in October of last year, where he beat Hector Aldana.

“It was a crazy ride because we were set to fight [Matt Brown]. And then everything happened with COVID-19 and then you know, we got different names and different types of dates,” Baeza recalled. “Then we said yes. And then something else happened. Then finally got we got Matt Brown again. And, you know, we said yes. It was on two weeks’ notice and we were just like, let’s do it. And it was a crazy up and down kind of thing. And I’m just glad to finally get it done.”

While some struggled with training during a pandemic, Baeza felt his camp went well. “It was strong, like when we first got the call, I think it was back in January. I felt good going coming in, when, up until I think it was 10 days out before it was canceled.”

The pandemic did change things up a little mind you. “We tried to train as much as we could, during COVID-19 when everything was kind of shut down. As much as we could while being within the rules. And, again, we weren’t sure what was going to happen. We kept on trying to keep training. Obviously, the intensity was taken down because of everything, all the setbacks with COVID-19. But we kept training every day and then again, we fight and then we just try to step it up from.

Baeza never lost focus of Brown, he said. “Definitely things were changing and we were just trying to prepare as best we could.”

As to what comes next for the now 9-0 welterweight, Baeza hasn’t given it much thought. “To be honest, Matt Brown was the target. Matt Brown was the guy to beat, so we don’t really look past anybody and especially not a Matt Brown. You know, he’s a legend and again, a guy that I’ve been watching, ever since I even started watching the sport. He’s always been a tough guy. So I didn’t want to look past him at all. I didn’t think about the day after, I  thought about today. 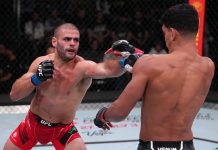 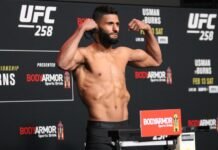