This Saturday when the third installment of the UFC Jacksonville trilogy takes place, it will be headlined with a fight that is certain to end things off with a bang. UFC on ESPN 8 offers a heavyweight slugfest, between veteran heavyweight Alistair Overeem, and the returning Walt Harris.

The fight between Alistar Overeem and Walt Harris was originally slated to take place back in December, before Harris was forced to remove himself from competition for the worst reason imaginable. The sudden disappearance and passing of his daughter was as horrific as it gets, and this Saturday Harris returns to action for the first time since the harrowing ordeal. There, “The Big Ticket” will be met with one of the most skilled strikers in heavyweight MMA history. That would be the “Demolition Man” Overeem, who is looking to bounce back from taking a loss on the very evening he was slated to fight Harris originally.

That December headliner saw Overeem dominate essentially four rounds, four minutes and fifty seconds, before being caught by a Jairzinho Rozenstruik punch that ended Overeem’s night in an instant. Not to mention opened up a Robbie Lawler-esque tear in his lip.

Still, Overeem always feels like he’s one win away from a title shot, while Harris is returning with fresh motivation, and on what would be a four-fight win streak, were it not for one of those wins being overturned to a No Contest.

Ultimately, the main event is a pick ’em — but check out our full video preview above! 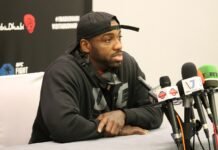