Kicking off a rare mid-week UFC card in Jacksonville, Florida on Wednesday were the returning Chase Sherman, and debuting Ike Villanueva. The heavyweight pair, if nothing else, promised fireworks. In his time away, Sherman had captured gold in bare knuckle boxing with BKFC, while Villanueva had long plied his trade on the regional scene.

As both men meet at center, Sherman was the first to land big with a sneaky left hand. Sherman started the kicks early, chewing up the outside leg of Villanueva. Ike started to wake up that point, coming forward throwing hands. As Ike was coming forward Sherman began piecing him up, being more technical than many might have anticipated. Sherman was starting to let lose, going to the body and head while attacking the legs of Ike Villanueva, really putting it on him in the latter part of the first round. Villanueva stood tough and lasted until the bell but took a lot of damage. Already Sherman looked much better than he had in his first UFC tenure.

Ike came forward to start round two but Sherman chewed up the leg and the body as well. Sherman landed yet another outside leg kick followed by an elbow, and one-two backing Ike against the cage. Villanueva was visibly hurt from all the damage. Sherman went for the finish landing the elbow in the clinch dropping Ike sending the ref in. Sherman looked excellent in his return to the UFC with impressive boxing skills.

JUST GETTING STARTED! 🗣@ChaseShermanUFC makes a HUGE IMPACT in his Octagon return. 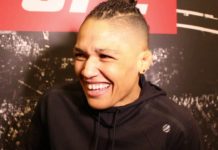 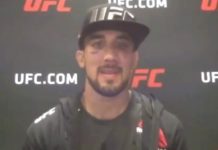