Calvin Kattar looked great in his bout with Jeremy Stephens at UFC 249, landing a brutal elbow to earn the second stoppage of the night.

Third time’s the charm nearly wasn’t the case for Calvin Kattar. His fight with Jeremy Stephens, part of the UFC 249 PPV card, had twice been cancelled. Finally set for Jacksonville, the fight nearly derailed again when Stephens missed weight by a full 4.5lbs for the fight.

Given the short-notice nature of the fight, one might be inclined to cut Stephens some slack. To play devil’s advocate, mind you, he was the only fighter on the card to come in heavy. Among a number of short notice combatants.

In any case, the fight was a go. Saturday night, MMA fans finally got to see the featherweight pair square off. We opened round one with some aggressiveness from Stephens controlling the Octagon. A missed hook from Kattar was answered by a Stephens body kick followed by some heavy punches against the cage. Stephens looked super confident in the opening minute of the fight. Kattar returned the favor with an exchange landing a right hook. Stephens continued to control the pace, landing heavy hooks followed by low kicks. With under two minutes remaining in the rounds both men landed hooks, Stephens continued to find the stronger punches. As we closed, Kattar landed a strong combination finishing with a clean jab. Stephens’ gameplan was clear in attacking the lead leg. With under 30 seconds left, Kattar landed a straight right that clipped Stephens in a wild first round.

The second round started with more of the same, with both men refusing to give up space. Kattar was beginning to bruise up Stephens’ leg with low kicks of his own. Kattar landed a beautiful combo, showing off his extreme boxing skill. As Stephens looked for the clinch, Kattar continued to force his punches. In the middle of the Octagon, Kattar landed an insane right elbow to drop Stephens. A few ground and pound strikes forced the stoppage.

It is clear that Calvin Kattar belongs in the top of this division. Skilled boxing and strength continue to prove that this Massachusetts native is the best title hope for the state in the UFC. Kattar avenged his loss to Zabit, a fight many saw going his way later in the fight (only a three-rounder), Kattar is ready for another top contender. 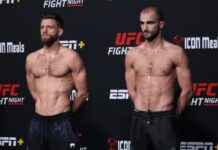 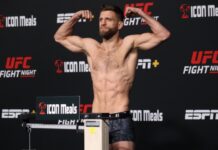