Anthony Pettis is fighting a friend when he faces Cowboy Cerrone this weekend at UFC 249.

That’s not the problem. As “Showtime” pointed out Thursday, at the UFC 249 virtual media day, he once fought (and knocked out) Stephen “Wonderboy” Thompson. Otherwise known as one of the nicest guys in mixed martial arts.

No, it’s not fighting a friend that is the issue ahead of his rematch with Cerrone — Pettis won their first meeting back in 2013. Rather, it’s the confidence he seems to have lost.

Asked where he stands at the moment, in terms of divisions, and pursuing a title, Pettis responded “I need to get my confidence back. That’s what I’m focusing on now. I have to go back; quarantine made me re-address everything. Even when I practice, I’m better than most of the guys I train with. It’s just a matter of putting it together in the octagon when it matters.”

“I’m focusing on the little moments now. Winning the minutes, winning the rounds, winning the fight before I decide to jump back into ‘where am I going to win a title at?'” he added.

It’s probably one of the more honest assessments you’ll find from a former champion. And a confident Pettis is a scary proposition for opponents. Should he find it, you could very well see the return of the fighter who brought you the “Showtime Kick.”

So whether Anthony Pettis remains at welterweight remains to be seen. As he pointed out, he’s taken some risks. He’s clearly not against rolling the dice. “I won the world title at 155lbs. I fought for the world title at 145lbs. Then I’m jumping up to 170lbs. I’m kind of all over the place with my fights. I’m trying to find a home. Once I find a home where I feel comfortable— I think 170, I felt great, then that [Nate] Diaz fight, a totally different feeling. This is my third time at it, the weight cut is the best.”

Now, Pettis said, it’s all about results. That will dictate where he ends up.  Results will build confidence. And whatever weight class he lands in then, look out.

Anthony Pettis faces Donald “Cowboy” Cerrone this Saturday, May 9 at UFC 249 in the featured preliminary fight on ESPN (TSN in Canada). 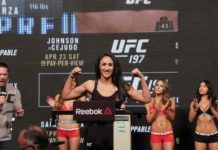