Jimmie “El Terror” Rivera (22-4) was scheduled to face Marlon Vera earlier this year, but a nagging neck injury worsened and caused the #8 ranked UFC bantamweight to pull out of the fight. We caught up with the top 10 fighter and Tiger Schulmann mixed martial arts instructor to discuss how he is healing up, and what he has been doing during the Covid-19 pandemic.

Rivera was on the mats drenched in sweat when we began our conversation, as he just finished a workout with Ultimate Fighter winner and fellow UFC standout Mike Trizano. Asked how they are dealing with the pandemic and what they are doing to stay ready to compete, Rivera said that “The whole team right now, the only thing we are missing right now is training partners. We are all running, lifting, and strength training, everything we can do on our own. We just don’t have training partners cause our headquarters are closed, but we are hoping to open up soon and start training.”

Rivera has also been teaching virtual classes to his students during the pandemic when they cannot get into the popular gym to work with others. “The facility is closed but it doesn’t mean you can’t train at home, if you have a space to train. We can make it work so it’s something temporary,” he said. “We had all 44 locations— each instructor took a class and we taught 12 classes a day Sunday through Saturday. What’s really normal right now is training from home, so this way I can help the kids and adults from my house while I’m teaching them and I can correct them and see them again. One of the things that sucks being a teacher with this pandemic is you don’t get to see your students in person.”

Rivera discussed how he is feeling now that he is back to training partially. “Yea I feel way better, I had a bad neck injury that I’ve dealt with for years but it just got worse. I am back, I’m just kind of waiting for headquarters to open so I can test my neck for two or three weeks and from there if I feel good I will call my manager and get a fight going.”

As far as his previously scheduled opponent, Marlon Vera, and whether he wants that fight to be rescheduled, Rivera did not seem too enthusiastic about the idea. “I know he was upset, but the only reason he was upset is because he wanted to fight above, which I understand. At this point for me coming back I’m looking to fight above,” Rivera admitted. “I know people say the rankings don’t mean anything but for me it does and I wanna try and climb the ladder I’ve fought my last four or fights behind me and I don’t want to be that stepping stone I want to keep fighting forward.”

When pressed about what he wants next, Rivera was crystal clear. “I always ask for the hard fights, I would love to fight Petr Yan again, I would like to fight Moraes again. As far as Sterling goes I am not gonna lie, I’m gonna be honest, I didn’t show up that night kinda like Cowboy when he fought Conor.”

“I made some mistakes in my weight cut and it showed in my fight,” the bantamweight admitted. “I didn’t get hurt but I also didn’t fight. I want those rematches or I want someone ahead of me I want to get one of the losses back or someone ahead of me and move forward.” As far as a timeframe for when he steps back into the octagon the top bantamweight is looking to target mid summer. “We are hoping for mid May to open up the gym so from there I wanna say four to six weeks I could have a fight.”

The UFC is scheduled to return on May 9, and I asked Rivera how he believes former Champion Dominick Cruz will do when he faces current Champ Henry Cejudo for the bantamweight title. “I am a business man, I know about business, it’s a good business move for the UFC. When they make fights I understand the fighter’s side and I understand the business and what makes sense for a fighter’s side is kinda like a martial artist and what should be like the Ali act, but then on the business side, Cruz is a big name but I don’t think he’s gonna do well. I think Henry is gonna run right through him. I think Henry has a big upside on the fight and at this point Cruz is on his way out”. 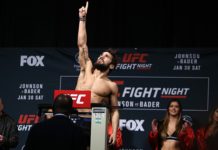 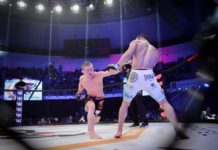