UFC 200 brought arguably the most stacked line-up in the history of mixed martial arts, but it went down as an event where the biggest storylines took place outside the cage.

Every fan (and media member too, to be honest) wants the most bang for their buck.  For the price of pay-per-view, time invested, and energy spent to set up a night of entertainment viewing, everyone wants the most stacked event possible.  On July 6, 2016, the UFC delivered exactly that with arguably the most stacked card in terms of name recognition in the history of the sport.

The event was so stacked that even after losing a title fight, the card remained loaded enough that a title eliminator was relegated to the prelims.  With names, storylines, up-and-comers, and everything in-between, to look back at UFC 200 remains quite a sight.

The night’s headliner saw current double-champion Amanda Nunes look to claim UFC gold for the first time.  Coming off a split-decision victory over then newcomer Valentina Shevchenko, Nunes was facing women’s MMA star Miesha Tate.  Remember, Tate had just come back from the brink of defeat to submit Holly Holm to become a champion herself.  Many expected a back-and-forth battle as Tate was on a five fight win-streak and was arguably the second best bantamweight in the world at the time going into the fight.

Instead, Nunes delivered the first of several throttling performances that she has become known for with a blistering first round finish that saw her damage Tate with strikes before eventually securing the rear-naked choke finish.  Since then, Nunes has had a historic run that continues to this day as she has defended the bantamweight title five times and claimed the UFC featherweight title as well.

Brock Lesnar after UFC 200 bout with Hunt: 'I guess I can take a shot' (@HunterAHomistek) https://t.co/8O9uArSVL2 pic.twitter.com/hMD9gxPGb3

In the co-main event, fans were treated to a showcase bout that saw former UFC champion and current WWE Superstar Brock Lesnar return to take on heavyweight knockout artist Mark Hunt.  Despite a strong first round from Hunt, Lesnar survived to take a unanimous decision behind his wrestling heavy attack.  Many wondered if the performance was a sign of a possible return to MMA, only for Lesnar to test positive for a banned substance that led to his suspension and the fight being overturned to a No Contest.  It would be the last MMA fight for Lesnar who closed the door on a return when terms could not be reached for a fight with then heavyweight champion Daniel Cormier last year.

Daniel Cormier, coincidentally, would be involved in the largest storyline of the entire event. Cormier was set to defend the light-heavyweight title against his arch-nemesis Jon Jones who had set-up the fight by winning the interim belt after being absent for over a year due to issues outside the cage.  In a stunning turn of events, Jones was pulled from the event after testing positive for a banned substance just 48 hours out from fight night.  The move led to former champion and UFC legend Anderson Silva, in Vegas for International Fight Week, to step in on just two days notice to keep Cormier on the card.  Cormier elected to take a safe approach under the circumstances and wrestled Silva for the majority of the fight.

Usually, such a triple-header would be enough to be considered an impressively stacked pay-per-view on par with any of the International Fight Week events held before or since.  However, UFC 200 was so stacked that a fight between featherweight legend José Aldo and Frankie Edgar for the interim title was relegated to being fourth from the top.  While often lost in the aftermath of the event, Aldo put on arguably his most technically sound performance of his career in defeating an equally game Edgar in one of the most high level championship battles in featherweight history.  An enduring image from the night also saw then undisputed featherweight champion Conor McGregor on his feet amidst the sea of seated spectators watching the fight intently.

Although impossible to fathom at the time, the event also saw the last UFC victory in the career of former champion Cain Velasquez.  Coming off a year-long layoff, Velasquez looked sensational in taking out surging contender Travis Browne.  Velasquez stopped Browne in first round and many felt that another shot at the heavyweight title was not far off.  Instead, further injuries and another absence would lead to a three year long hiatus for Velasquez.  He would return in 2019, losing to Francis Ngannou in the first round, before stepping away from MMA to his current endeavor as a pro wrestler.  Velasquez went on to be part of several smaller wrestling promotions before making his WWE debut last year.

The preliminary card was not lacking for name value either.  Most notably, former champion TJ Dillashaw won the rematch with perennial contender Raphael Assuncao in a title eliminator that set up a bout with his former teammate Cody Garbrandt for the belt.  Future middleweight title challenger Kelvin Gastelum took on former champion Johnny Hendricks.  Other names peppered throughout the prelims were Sage Northcutt, Cat Zingano, Joe Lauzon and Diego Sanchez.  Perhaps the ultimate testament to the depth of the card, future Bellator middleweight champion Gegard Mousasi ended up taking home Performance of the Night honors against future UFC title challenger Thiago Santos on an early UFC Fight Pass prelim that could not fit into the televised broadcast.

While not technically the 200th event for the UFC, it was still treated as a huge benchmark for the company.  The card stood out in arguably the best year in the history of the UFC overall.  Consider that in 2016, the pay-per-view record was also set and broken by both fights between Conor McGregor and Nate Diaz and that the UFC was sold for $4.2 billion ahead of their first event in New York after battling for legalization for years.

Most will remember the card for its visually distinct appearance.  The usually grey mat inside the cage was instead replaced with a goldenrod yellow.  The white UFC logo on the fighters gloves was changed to a metallic gold color for the event.  Also, it was one of the first events that saw a greater expansion for the Reebok fight kits.  While fighters were exclusively in either black or white kits earlier in the year, UFC 200 saw the addition of more colors that allowed more choices for the athletes.  It was also the last event to benefit from several days of UFC action, with fight cards on both Thursday and Friday leading up to the event.  Finally, it was also the first card that saw the partnership between the UFC and the T-Mobile Arena as the official venue for events in Vegas, which continues to this day.

UFC 200 served as a lesson in star-power for the pay-per-view model.  The card was originally set to be headlined by the rematch between Conor McGregor and Nate Diaz.  One of the biggest storylines before the card was that McGregor was scratched from the event for refusing to travel to do press leading up to the fight.  Despite the stacked line-up and placement on International Fight Week, the UFC 200 was outperformed roughly a month later by McGregor’s rematch with Diaz on a far less stacked card in UFC 202. It would set the pay-per-view record, which stood until McGregor’s fight with Khabib Nurmagomedov.  While stacked events have been put on in the years since, the UFC has shown greater confidence in the biggest stars competing in the biggest fights to deliver numbers without as much support on the undercard.

If UFC 100 set the benchmark years prior, then 200 was an impressive milestone that illustrated just how far the UFC had come in the modern era. 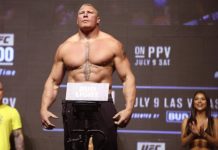