Bellator MMA featherweight champion Cris Cyborg is one of the most feared, formidable, and successful women to ever compete in mixed martial arts.

Yet like the rest of the world, she’s stuck home these days. In quarantine, staying in place during the coronavirus pandemic. Bellator hasn’t held an event since February; its most recently scheduled card, Bellator 241, was cancelled a day in advance, just as the pandemic was really taking root stateside.

Cyborg (22-2, 1NC), who has held gold in Bellator, the UFC, Invicta FC, and Strikeforce, described her current life while speaking to Cageside Press this week. “Follow the rules, be home, use the time to be with my family, reading. Use the time to do different things you’re supposed to do when you’re very busy.”

And while she waits for the world to return to normal, “be thankful every day, and wait for the next opportunity.”

Being at home is a definite change of pace for the 145lb champ. “Usually I’m never home,” Cyborg said, revealing that “last year, I think I stayed [home] three months.” Now, she’ll be hitting the three month mark shortly, confined to the house with her fiance, mother, and daughter.

To keep busy and stay connected with fans, Cyborg has been running online training classes every Thursday. They’re free, and based on a simple concept: “let’s do something nice for all the fans that are going to be home and need something to do.”

In the meantime, she still has dreams of pursuing a boxing match. That opportunity was something that drew her to Bellator, which has been gracious in allowing athletes to pursue opportunities outside the promotion.

However, nothing is set in stone. “Now I’m not sure if this plan is going to continue, or if we’re going to go to mixed martial arts.” The coronavirus has certainly thrown a wrench in the works, although she has continued to “push forward a little bit for the boxing match. I’m really excited about it.”

The plan, as it stands, is to fight Cecilia Braekhus in the ring. Braekhus is an undefeated 36-0 in boxing, and holds the WBA, WBC, WBO, IBF, IBO, and The Ring female welterweight titles. The longest-reigning female boxing champion in history, she was expected to fight Jessica McCaskill this month. The ongoing pandemic scuttled that fight however.

Given Braekhus’ unblemished record, the fight feels a little like the female version of Mayweather vs. McGregor. Cris Cyborg, for one, recognizes that she has star power. But she’s also leaving placement and location to the promoter in this case.

“I would like to come to any place I never went before, with respect. For sure, I know who the promoter is who it’s going to happen [under], who’s going to promote the event. They have the perfect plan about this,” Cyborg said. “They know how to work this, they know I have a big name. But I always respect all the people.”

While she didn’t let slip who the promoter in question will be, Cyborg later reiterated that there was a plan in place. A roadmap involving both boxing and MMA. She won Bellator’s women’s featherweight title back in January, dethroning long-serving champ Julia Budd. “We already did a plan. We did a plan, the next fight was going to be a boxing fight. But we have delayed now, because of the situation. We had the plan to do boxing, the next one was going to be to defend my [Bellator MMA] title. But now because we have a little bit of a delay, maybe we’re going to go straight to defend the title.”

Cyborg, frankly, isn’t sure what’s next. “It’s too soon.” Instead, her manager, Audie Attar, and Bellator CEO Scott Coker, are working to hammer that out. In the meantime, “we wait, and be patient. Be patient for the perfect move.”

💯 Ronda deserves credit for what she accomplished. 3 of the 4 girls to beat Nunes lost to Ronda in under a minute.

While that all plays out, Cyborg continues to engage with fans via her online workouts, and on social media. She’s also continued to tease the idea of a run with the WWE. Where rival Ronda Rousey recently turned heads by referring to the business as “fake fighting.”

It’s going to take another MMA fighter to show that wrestling has always been real. @BookerT5x https://t.co/g4neWMED3Z

After exiting MMA off a loss to Amanda Nunes, Rousey signed with the WWE, and quickly ascended to the top of the company. She served as WWE women’s champion, before leaving the organization after just a year.

“I don’t have any problem with Ronda,” Cyborg told us, a comment that may surprise some. A wrestling match between the pair has long been floated, given a real fight between them never happened. Cyborg even came out in support of Rousey recently, defending her from critics. “I think everything happened at the beginning, she said a lot of things about me so she could grow her name. At the beginning, nobody know who she was. Then she started to use her name on top of my name.”

A lot of the dislike between the pair, suggested Cyborg, was about building their names in the sport of MMA. “I think the right thing [now] is to support each other.” That said, Cyborg also understands that WWE fans are not at all pleased with Rousey labeling pro wrestling “fake.” 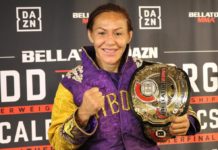 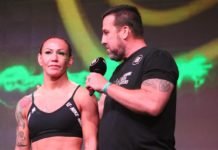