Former UFC heavyweight champion Frank Mir is, for all intents and purposes, a free agent. Mir announced the news on his Phone Booth Fighting podcast earlier this month.

Mir (19-13), now 40, joined Bellator MMA in 2018, after sitting out the final two years of his UFC tenure due to a USADA violation. He went 0-2 to start his run, being finished by Fedor Emelianenko and Javy Ayala. But he bounced back with a unanimous decision win over Roy ‘Big Country’ Nelson last year at Bellator 231.

The win left one fight on Mir’s original four-fight deal with the Viacom-owned company. The contract was due to expire this month, but with business shut down due to the coronavirus, there was no way Bellator was going to be able to get him a fight in time.

And so Mir, who has also worked as a commentator over the years, reached out to Bellator CEO Scott Coker.

“Basically I had a good conversation with Scott Coker,” said Mir. He went on to say that he’s “still going to have a fight with [Bellator], just because there’s still a fight left on my fight contract. But because of April, the contract coming up [April 1st]… Scott was very easy to talk to about it. Their company’s shut down. He hasn’t even left his house in three weeks. So once you start up, there’s going to be a backlog of fights because they have so many guys on their roster.”

“So now I’m basically, not basically, I am a free agent. Even though I would still do fights for Bellator, I’m not beholden to any contract to anybody now. So I can try out the free market and see whoever opens up fighting first.” Mir would go on to highlight one particular locale he’d love to fight in: Japan.

“I still tell everybody that it’s a dream of mine to maybe fight in Japan,” said Mir. “Not maybe. It has always been a dream of mine to fight in Japan,” he corrected. “I remember watching the old PRIDEs back in the day, and RIZIN looks like they have a card coming up in August. So now I’m opened up to where now I can actually start talking to other companies and seeing where to go, which is great for commentary stuff, as I know before being exclusive fight-wise with Bellator I think hurt me as far as maybe commentating for the UFC. So maybe it’ll open up that avenue to where I could start commentary for UFC fights again and other organizations.”

Fighting for another promotion at all, exclusive or not, would likely hurt Mir’s chance of doing commentary for the UFC. But it’s clear that returning to the booth is on his mind. So is fighting, however, and that will no doubt come first for now. Should RIZIN not work out — or perhaps in addition to it — Mir also singled out a second promotion he’d like to appear for: Poland’s KSW.

KSW has become one of the strongest players in Europe, moving into the U.K. in recent years. Phil De Fries, a former UFC and Bellator fighter, currently holds the heavyweight crown there. The promotion also employs former World’s Strongest Man winner Mariusz Pudzianowski — who Mir singled out for a potential match-up.

“KSW looks like a phenomenal show,” Mir exclaimed, noting that their production values were “crazy. They have some interesting fights over there in the heavyweight division.”

“Fighting the strongest man in the world, Pudzianowski, that would be interesting,” he admitted. “There’s just a lot of interesting things that you can do now, when you’re fighting, moving around and all. I guess for now, just be the nomad.” 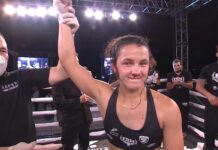 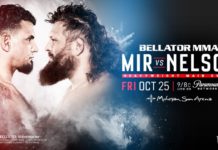