Once upon a time, Renato Moicano was on the brink of contendership, with wins over the likes of Jeremy Stephens, Calvin Kattar, and Cub Swanson. But Moicano’s surge to the upper echelon of the featherweight division had been halted in 2019 thanks to back-to-back losses against Jose Aldo and The Korean Zombie. And so at UFC Brasilia, he was badly in need of a win over Damir Hadzovic. The fight was being contested at lightweight— a new division hopefully the cure for Moicano.

Hadzovic had last competed in June, losing a unanimous decision against Christos Giagos.

This one got off to a quick start. Moicano had the back in a flash. He pulled Hadzovic to the ground, and quickly got the hooks in then a body triangle. The rear-naked choke went in, and it was tight. Hadzovic had no choice but to tap, and that was that.

Things got a little ugly after the finish. Despite just having fought, the pair appeared to want to go at it again. That likely stemmed from Moicano getting right in the face of his opponent immediately after the tap, before Hadzovic had even regained his feet. He could then be overheard imploring the ref to let him speak to his opponent, calling out “I have nothing against you” despite instigating the fracas.

🇧🇦: "Then you shouldn't have submitted me." pic.twitter.com/uEcO9UYWkl

Afterward, Moicano could be overheard saying he was upset because he wanted to fight more. Hadzovic’s retort was simple: “Then you shouldn’t have submitted me.” 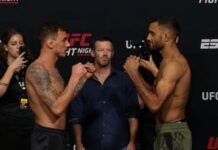 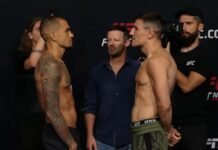