Just days ago, Edson Barboza made an impassioned plea for Dana White and co. to release him from the UFC’s service. Instead, the Brazilian is being booked into a bout with Josh Emmett, expected to take place at UFC Oklahoma City.

“I’m very thankful for these almost 10 years that I have been working for the company!” Barboza wrote on social media back on March 7. “I gave my best every single fight to put on a show for the fans, but I think it’s time to move on. I don’t have more time to wait. Please let me go.”

He tagged both UFC President Dana White and matchmaker Sean Shelby in the post. However, rather than let Barboza go, Combate reports that they’re putting him up against Emmett.

Barboza (20-8), 34 years old, is 1-4 in his last five UFC bouts — all of which have come in the lightweight division. He’ll drop to featherweight against Emmett, however, in the hopes of snapping a two-fight losing streak.

Emmett (13-2) won both his fights in 2019 after returning from a hellacious knockout loss at the hands of Jeremy Stephens suffered a year earlier. Since his return, he’s stopped both Michael Johnson and Mirsad Bektic. 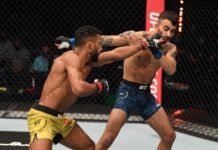