Another solid batch of prospects were in action in February – including a number of undefeated fighters. We’ll get right to those who impressed the most in the MMA Prospect Watch for February!

Herbeth Sousa fought Alexander Keshtov in February, which was a battle between two top prospects in the division. The fight, however, wasn’t even close as Sousa dominated all four rounds. Sousa secured five takedowns showing good chain wrestling in the process. Sousa gave Keshtov no room as he was all over him in the grappling department. It wasn’t a flashy performance but a very dominant one.
Grade: B

It was all Kyle Daukaus in this fight en-route to a second-round finish. Daukaus made this a grappling match showcasing his skills. He went for countless submissions such as the d’arce, arm-triangle, guillotine, and the RNC. His long arms led to a huge advantage on the mat. Daukaus was winning every grappling exchange and won every scramble. In the second round, he finally put his opponent away with the d’arce choke.
Grade: B

Iuri Lapicus had his biggest challenge to date going against Marat Gafurov, the former ONE Featherweight Champion. Lapicus started off the fight landing very hard outside leg kicks forcing Gafurov to tie up. Lapicus hit a beautiful judo throw then scrambled to the back to finish with the RNC. Beautiful finishing sequence.
Grade: A+

Erin Blanchfield fought Victoria Leonardo last month, who is a good prospect and someone we’ve featured here before. Coming in this was a grappler in Erin fighting a striker in Leonardo. Blanchfield couldn’t really get the takedown but she didn’t really need it. In the first, Blanchfield dropped Leonardo with a brutal head kick. Somehow Leonardo survived and made it to the second round. Erin threw that head kick over and over until she once again landed it flush this time sending the ref in. Leonardo is a super tough girl and a grappler just took her out with a head kick.
Grade: B+

Kenny Cross has quietly flown under the radar with four consecutive wins now, and a 100% finish rate. In this fight, he beat a good fighter in Robert Hale handing him his first TKO loss in his career. Light on his feet, Cross landed a straight left down the pipe buckling the knees of Hale. Cross capitalized with a left hook putting Hale down and the extra punches resulted in the TKO.
Grade: B-

Cody Brundage beat Erick Lozano last December via decision. The outcome wasn’t good enough so they rematched and this time Brundage got the early stoppage. Brundage quickly closed the distance and got the fight to the mat. He transitioned into the mount and would lock in the arm-triangle for the tap.
Grade: B-

Gadzhi Rabadanov usually dominates opponents with his wrestling. In this fight though, he excelled on the feet. Rabadanov scored four knockdowns throughout three rounds. He dropped his opponent with two short left hands and a short right hand. In round three, he landed a huge overhand right dropping his foe, but he was really tough. Rabadanov did well in burst and picked his shots well.
Grade: B-

Khabib Nurmagomedov has a lot of relatives in the sport and Usman (cousin) has quietly grown into a good prospect. Usman displayed a heavy kickboxing attack throwing at range plus front kicks and roundhouse kicks. While looking good from the outside, Usman landed  key knees in the clinch and some good elbows getting the TKO stoppage.
Grade: C+

L’udovit Klein continues to build his resume with seven straight wins now. In this bout he was able to take out a former UFC fighter in Łukasz Sajewski. The Polish Sajewski was heavy for the takedown at the bell. While Klien did show some solid takedown defense he was eventually taken down. Klein worked his way back to his feet and landed a barrage of punches and kicks. Klein would drop Sajewski with a head kick sending the ref in for the stoppage.
Grade: B- 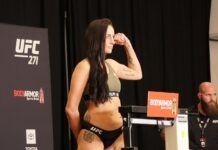 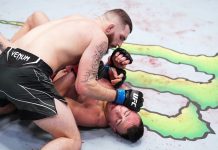