The KSW 53 line-up has undergone a massive shake-up. Promotion officials announced Friday that main event heavyweight and former World’s Strongest Man winner Mariusz Pudzianowski was out of the event with an undisclosed injury.

The Polish strongman had been expected to top the card against Quentin Domingos.

As a result of Pudzianowski’s withdrawal, Roberto Soldic (17-3) vs. Marius Zaromskis (22-9) has been promoted to the main event.

Mateusz Gamrot (15-0), who holds gold at featherweight and lightweight, is joining the card however. Gamrot will go up against Brazil’s Edimilson ‘Kevin’ Souza (18-5) in a lightweight contest. The fight will be a non-title bout.

Souza is a UFC veteran who went 3-1 with the promotion. Yet despite a winning record and two post-fight bonuses (Fight of the Night and Performance of the Night), he was released off his only loss, to Chas Skelly in 2015. He then stopped by Bellator MMA for a single fight, losing to Patricky Pitbull before making his way back to the regional scene. He has, however, won his last two outings.

KSW 53 takes place March 21, 2020 at the Atlas Arena in Lodz, Poland. The event is expected to stream live via KSWTV.com 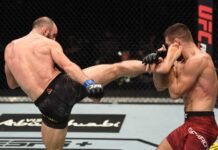 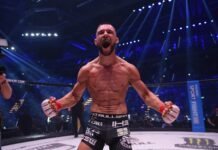