After her first headlining stint, in Dublin last month, featherweight Leah McCourt will get a quick turnaround. Bellator officials announced Friday that McCourt would face Janay Harding at Bellator London this May.

Fresh off her headline win in Dublin, Ireland, @leahmccourtmma returns to action on Saturday, May 16th where will face @harding_janay.#BellatorLondon tickets on sale now 👉 https://t.co/kMULc0lokt pic.twitter.com/mbtkiun9uZ

McCourt (4-1) got her start in the United Kingdom’s Cage Warriors promotion prior to joining Bellator MMA last year. She’s 3-0 in the promotion to date, with wins over Hatice Özyurt, Kerry Hughes, and Judith Ruis. The booking against Harding, however, will mark a significant step up in competition for the Northern Ireland native.

Harding (5-4) doesn’t have the most impressive record at the moment, but she’s made four appearances in the Bellator cage, and has competed against division regulars Sinead Kavanagh, Amanda Bell, and Amber Leibrock, picking up a win over Kavanagh in 2018. Harding has also stayed active outside MMA, taking a handful of boxing matches as well.

Bellator London is expected to be headlined by James Gallagher and Cal Ellenor, who, after having their fight cancelled twice, hope to finally battle it out this May. The event takes place at the SSE Arena at Wembley in London, England on May 16. Welterweight standouts Fabian Edwards and Costello Van Steenis battle it out in the evening’s co-main event. 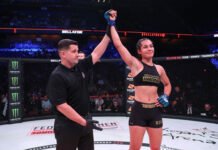 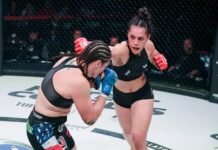