Invicta’s third foray into the one-night tournament format takes place at Pheonix Series 3. Here’s the top prospects to keep an eye on this Friday night.

Invicta FC, since it’s inception in 2012, has been the breeding ground for top female talent in MMA. The promotion has produced many fighters that would go on to become UFC champions, including Rose Namajunas, Carla Esparza, and even current double-champion Amanda Nunes. In 2018 the promotion began holding one-night tournament events, with Brianna Van Buren and Miranda Maverick winning the first two tournaments respectively. The third Pheonix Rising card is expected to hold a bantamweight championship fight at the top of the billing, a bantamweight tournament, and a slew of other bouts to keep an eye on.

The card is also notable for being the first major MMA event to utilize open scoring. The change was made following the controversial UFC 247 card in Houston, Texas. That was an event where many controversial scorecards were given out, prompting criticism for the current state of MMA judging. With that being said, there are many prospects and potential stars on this card. Let’s take a look at a few.

An initial look into Hansen’s record may not show the most impressive numbers, however, the most impressive part of Hansen’s career is that she’s been fighting professionally in Invicta since she was 18. Hansen began her career with an impressive 3-1 start, however, she would fall to 3-2 with a loss to another impressive prospect in Erin Blanchfield. However, since that loss, Hansen has appeared to turn a corner, going 2-1 with another win in an exhibition bout at Pheonix Rising 2. During that stretch, she earned one of the best comeback victories in Invicta history with a come-from-behind submission victory over Sharon Jacobson with seconds left after being dominated for two previous rounds.

Hansen is 20 now, and has been rapidly improving in her previous fights. She’s been booked in a prime spot on this big card, where she will surely have more eyeballs on her than normal.

Hansen is scheduled to face off with the Brazilian Liana Pirosin. Pirosin is 7-3, with her one fight in Invicta being a submission loss to current Invicta strawweight champion Kanako Murata. It’s worth noting that she lost that bout via submission, and the ground is where Hansen thrives like no other.

If the 10th Planet prospect Hansen can get through Pirosin, a showdown with Murata may be soon. Hansen is possibly one of the brightest strawweight prospects in the world right now, and she’s one of the top fighters to watch at Pheonix Series 3.

Taylor Guardado is possibly one of the strangest cases in MMA history. She at one point was one of MMA’s brightest prospects. Guardado went 9-1 in amateur MMA bouts with wins over the likes Of Raquel Pennington and Ashlee Evans-Smith. Her lone loss came in January of 2011 to future bantamweight champion Ronda Rousey. However, following her 9th win in June of 2011, Guardado completely disappeared.

Not literally of course, but Guardado never made her MMA debut. She never signed with anyone, and it appeared that she had turned her back on MMA. During her time off from the cage she was married, had two kids, and seemingly had retired from fighting. That was until this year when it was announced that Guardado would be competing in the Pheonix Rising 3 bantamweight tournament. To go from nine years of inactivity to fighting possibly three times in a night is insane, but that’s Guardado’s goal.

Now 28 years old and training out Team Couture in Las Vegas, Guardado isn’t the favorite by any means in Friday’s tournament. However, she still has a bright future if she comes out on top, and it would be one of the best comeback stories in quite some time.

Lisa “The Strangler” Spangler at the top of the card at Pheonix Series 3. The undefeated bantamweight is getting her crack at the vacant bantamweight championship against Julija Stoliarenko. Spangler goes into the main event title fight sporting a 5-0 undefeated record with wins over the likes of Shanna Young, Katharina Lehner, and Kerri Kenneson. That win over Kenneson came at Spangler’s last fight in November.

The 24-year old is one of the most well-rounded fighters at bantamweight in a crowded Invicta 135-pound division. Spangler has been audible about one day getting that call up to the UFC, and a win over Stoliarenko could potentially get her the promotion she wants. Spangler could also potentially be facing the winner of Pheonix Series 3’s bantamweight tournament next if that’s what the promotion wants.

However win, lose, or draw, Spangler remains one of the brightest young stars that Invicta has. If there’s a single fight to watch on Pheonix Series 3, it could be the main event, and Spangler’s potential breakout fight. 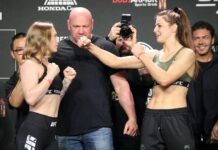