Norfolk, VA — Coming into your UFC debut on short notice almost always leaves you as the underdog. No one, however, bothered to tell ‘The Alpha Ginger’ Spike Carlyle that. He got going early, hurting opponent Aalon Cruz with an elbow in their UFC Norfolk preliminary card bout, then finishing the fight with ground n’ pound — including double hammerfists.

Carlyle had a rather interesting post-fight interview, including calling out “187 666” on the mic. Backstage, speaking to media outlets including Cageside Press, he didn’t care to elaborate, at least initially.

“Like Jesus, sometimes we speak in parables,” Carlyle said. “I’m not going to let you know what the left hand or right hand is doing.” Later, he spoke of the duality of alpha and omega, and Jesus Christ and Satan. For those digging, that seems to be the idea behind it.

Carlyle did address the elbow that set up the end, which some questioned the legality of. Including the UFC broadcast team. Admitting he’d need to go back and re-watch the fight, he added that “Everything felt fine. Sometimes I wish the refs would stop the fights earlier. This has been the second fight where I’ve had to put an exclamation mark on it. I hate seeing guys go out when they’re obviously out of the fight.”

The situation — not wanting to hurt an opponent — is an internal struggle, Carlyle explained. “If you look at my amateur record, all my finishes were submissions. But now I realize, this is not just a physical battle. This is a spiritual battle. When I’m fighting, I’m not just fighting the physicality, I’m fighting in the spiritual realm. It was not Aalon Cruz I was fighting tonight, it was Aalon Cruz’s demons. And I obliterated them.”

Heading into the fight, the feeling wasn’t much different than the earlier bouts in his career. Carlyle could be seen grooving, as he sometimes puts it, before the fight. “My coaches were telling me, everyone was telling me, it’s no different. A fight’s a fight. Same routine I always do. What was awesome about this was, a little more people. I can enjoy the crowd, and the energy from the crowd. I can’t wait to fight for bigger shows and have more and more people there.”

‘The Alpha Ginger’ fought at 170lbs as an amateur, and 155lbs more recently. He took this fight at featherweight, however, and plans on staying put for now. “I’ll fight anyone, anywhere, any time really,” he said. “Right now we’re on the 45 path, and we’ll see where it goes. Taking it one fight at a time. I’m ready to fight next week, tomorrow. I wish there was a tournament, I wish I could fight more than once in one night. I took no damage, so I’m good to go.” 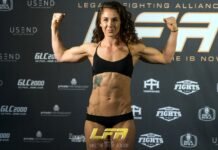 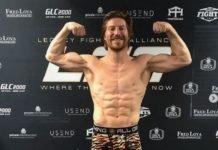 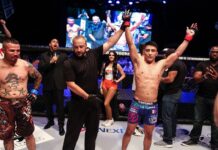 LFA 103: A Trio Of Underrated Fights