Tito Ortiz has his win back. Just days after it was revealed his submission of ex-WWE star Alberto Del Rio had be changed to a “No Decision,” the Texas Department of Licensing and Regulation has reversed course.

The move surprised many, given Ortiz’s clean history in the sport. Ortiz originally picked up the win on December 7, at a Combate Americas card in McAllen, Texas. It was the Hispanic promotion’s first foray onto PPV.

No official explanation for the win being overturned had been given prior to today. In a statement to Cageside Press and other media outlets, however, the TDLR explained that

“A urine sample provided by Jacob “Tito” Christopher Ortiz on Dec. 7, 2019, at the Combate Americas MMA event showed a potentially disqualifying substance that Ortiz claimed was prescribed by a physician. Pending the outcome of the TDLR inquiry into whether the substance was indeed prescribed by a physician, TDLR marked the fight results as “No Contest.” TDLR confirmed with the physician that the item was prescribed to Ortiz. TDLR has reinstated Ortiz’s victory in the Dec. 7 bout.”

Ortiz was livid at the win initially being overturned, calling the decision B.S.

Earlier Friday the TDLR responded to a request for comment from Cageside Press, noting that it was standard practice for the commission to overturn results prior to the completion of any adjudication process. Additionally, they revealed that no hearing or inquiry into the matter was scheduled — not surprising, as it was subsequently announced that the “disqualifying substance,” which has not been named, was doctor prescribed.

Ortiz (21-2-1), the second-longest serving light heavyweight champion in UFC history, is currently on a three fight win streak, including victories over Chael Sonnen and Chuck Liddell. While he has retired from regular competition in the past, the “Huntington Beach Bad Boy” has indicated he’ll return now and then, for the right opponent, as long as his health allows. 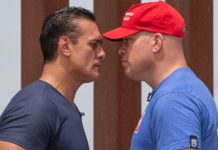