Tony Ferguson is approaching the biggest fight of his mixed martial arts career.

The former interim UFC lightweight champion will challenge Khabib Nurmagomedov for the 155-pound strap in the main event of UFC 249 on pay-per-view (PPV) from the Barclays Center in Brooklyn, New York on April 18. Ferguson and Nurmagomedov have been matched up to fight several times over the years.

Unfortunately, those fights have fallen through each time due to injury to both men. However, despite the pair never fighting each other, coach Eddie Bravo tells Joe Rogan on a new episode of Rogan’s podcast, “The Joe Rogan Experience,” the team has been preparing for Nurmagomedov the entire time (H/T MMA Junkie)

Bravo went on to praise Ferguson and his skillset. The jiu-jitsu legend went as far as to say that Ferguson may have more weapons in his arsenal than anyone in the history of the UFC.

“Tony wrestled his whole (expletive) life,” Bravo said. “There’s a light-year difference between Conor’s wrestling and Tony’s wrestling, so you’ve got that. Tony will throw D’Arce (chokes) standing and from all different angles, and while you’re trying to take him down. So Khabib’s got to worry about that.

“Khabib has my respect a million percent – that guy’s insane. But Tony has so many (expletive) weapons. He might have more weapons than anyone in the history of the UFC.” 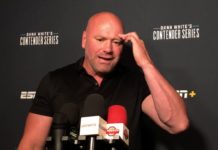