BTC flyweight champion James Clarke will make his first title defense this weekend at BTC 9, going down inside the confines of the Kitchener Memorial Auditorium in Kitchener, Ontario. It’s the first show of 2020 for BTC, a promotion that has played a large part in bringing MMA back to the province. For Clarke, meanwhile, it’s his first fight since last June, when he captured the belt against Dave Henry with a five-round unanimous decision.

Clarke, from Lindsay, Ontario, has moved around a bit through the years. He’s trained in Thailand. Competed in Singapore. Currently, he’s back in Ontario, in Oshawa. For a time, as a child, he lived in Winnipeg. He still has friends there, and a sister, meaning he sees the oft derided city in a positive light. “The negative is that negative weather. I walked to school one time in minus 55C. That was with the wind chill obviously. They sent us home at lunch time. Of course, we had no power at our house,” Clarke recalled. “That’s usually, when people ask how I like Winnipeg, I usually start off with that story.”

It’s Ontario where Clarke has made a name for himself more recently, however, winning three straight fights after starting his pro career 1-3. That win streak culminated with the BTC flyweight title win. In celebration, “we were popping champagne, I think I drank out of the big four foot trophy they gave me. Maybe it was five foot, it was probably taller than me actually.”

But aside from that, the revelry was kept to a minimum. Back to training, in other words. “I didn’t let it go to my head. Sometimes you can let a win go to your head, and you lose a little bit of motivation. Sometimes the losses can teach you a little more than the wins,” Clarke observed.

“I’m pretty eager to get back into the winning ways,” he added. And as Clarke’s coach, Justin Bruckmann, puts it, “you’re not the real champ until you defend it.”

While Clarke is back hone at the moment, his MMA journey, as noted, has taken him around the globe. “I had about four or five fights fall through” Clarke revealed, referring to the period after he won the belt. “Everybody had all kinds of excuses. I had this chance to go out to Singapore, and everybody was pretty supportive on that, including BTC. I was definitely 100% ready to fight, but the fights just kept falling through.” So to Asia he went.

Clarke understands that fights falling through is part of the game. mind you. He’s had an opponent pull out the night before a fight. But the silver lining was heading to Singapore for a tournament that has helped hone his skills as a fighter. “I went down there, it was a tournament style, I had to make fight weight four days in a row. So I had to make 125lbs four days in a row.”

The tournament in question was part of the GAMMA (Global Association of Mixed Martial Arts) World Championship, an event sponsored by Asian powerhouse ONE Championship. The bouts reflect on Clarke’s amateur record. “I ended up winning three out of the four matches. The last match was pretty controversial as well. I think that even helped, even though I lost it, it helped my star power a little bit.”

Weight cutting is a trial when you have to do it once. It’s something casual observers and those outside the sport may struggle to understand. Four days in a row is especially taxing. Despite that, “I was confident I was going to be able to make it two days in a row. And perform on the same day,” said Clarke.

The young fighter arrived in Singapore under the belief that things would be a little different, however. “They were calling it a hydrated weigh-in,” he said of the process. That led Clarke to believe he had some wiggle room, based on ONE Championship’s weight rules, which also utilize a hydrated weigh-in. It wasn’t the case. “No, you’ve got to be on weight, four days in a row.” That said, Clarke got it done, each and every time. “I only had to cut two pounds of water weight every day. It was pretty easy. I’ve had to cut eighteen pounds before. That’ll take it out of you. Cutting eighteen pounds in the sauna is definitely no fun. I’ve done a little growing up since then.”

The ease of making the flyweight limit has even had Clarke consider a lower weight class. “I’ve often thought I could do strawweight if it came down to it. Actually ONE Championship, how they do it now, their strawweight division is just a hydrated weigh-in,” he pointed out. “You’ve got to be 125, but you’ve got to be hydrated. That’s pretty much the next goal in mind, but on this side of the world, unfortunately there’s nobody that’s a big enough name to fight, so it’s just not worth my time.”

If you’re noticing a theme here, Clarke is definitely keeping an eye on ONE these days. “I’m pretty much Team ONE Championship,” he revealed. “Even though the UFC is still a main goal of mine. Any top promotion really. The idea is to do what you love, and you’ll never work a day in your life.”

There’s a lot Clarke likes about ONE. There’s the lower weight classes. Their App, “that’s pretty much identical to UFC Fight Pass,” but free, as he later noted. They’re “almost a two billion dollar company now too.” To Clarke, ONE’s lack of presence in North America has them overlooked here, but he’s very hyped up for the company’s future.

“UFC has always been my main goal. I’ve only recently changed my mind in the last year. I just like how [ONE] runs things,” he explained. “I got to see my first ONE Championship show when I went down there to Singapore. It just seems like they take care of their fighters a little bit better. Their strawweight division is just as booming as their flyweight division almost.”

There’s also the matter of promotion. After all, that’s what organizations like ONE and the UFC are. That’s what they’re supposed to do. But the UFC has never managed to create a bonafide star in its lightest weight class. “You’ve got guys like Demetrious Johnson pulling off suplex arm-bars in the fifth round. To me, he didn’t get enough credit for that. I’ve tried to do that in the gym so many times since then,” observed Clarke.

“I just feel like they don’t advertise the little weight divisions enough to really become huge stars like that. I think that’s part of why Demetrious Johnson left,” he added.

Before he can worry about larger promotions, however, Clarke has a fight on his hands. ‘The Suplex Kid’ is putting his title on the line against Gabe Sagman (6-4) at BTC 9, a fighter who has been competing since at least 2012.

“I’ve done a little bit of research actually,” Clarke answered when asked about his opponent. “I always do my homework. In the past I have driven myself a little bit nuts watching too much.” So this time out, it’s a more measured approach. “It’s good to just know what he’s done, and the rest goes to just testing my ability.”

One thing that did stand out to Clarke, however, was Sagman’s gas tank. “I noticed he gasses out in his three-round fights a little bit,” Clarke said. “I’ve been known to even wear down a little bit in the later rounds.” That said, he added that “my last fight did go the distance at five five-minute rounds.” At the time, noted Clarke, “I didn’t have a strength and conditioning coach at that point.”

That’s something Clarke has rectified, adding roughly three strength and conditioning sessions to his training weekly. “It’s already done wonders for my training.”

In terms of a prediction, said Clarke, “I think he’s going to fade in the later rounds. Even if you compare our old fights to old fights, I feel like I’ve just got more of a heart than him.”

Clarke also addressed a bit of the trash talk ahead of the fight. “He called me the paper champ trying to get this fight actually. That pissed me off. I don’t know if he’s getting a handshake from me at the weigh-ins,” the champ quipped. “We’ll see. I’ve got no bad blood when it comes down to it though. He wants what I have, and I plan on full-well defending that belt.”

BTC 9 goes down Saturday, February 29, 2020 at the Kitchener Memorial Auditorium in Kitchener, Ontario. For details, head over to BTCFight.ca 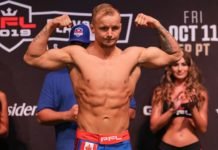 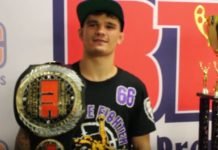