Kai Kara-France got back on the winning trail with a fun win over Tyson Nam at UFC Auckland.

Flyweight action at UFC Auckland saw eighth-ranked 125-pounder Kai Kara-France taking on the unranked Tyson Nam. A rather interesting notion, given that only 14 flyweights had numbers next to their name heading into the weekend. Why Nam (or another deserving fighter) didn’t already qualify for that 15th spot was a question. A bigger question was whether Nam could overcome City Kickboxing’s Kara-France at home.

Kara-France went for a cartwheel kick to open the second round, and Nam was having none of it. Nam continually threw his jab out to open out the right hand, but he was having difficulty finding it. Kara-France went for a takedown but Nam stuffed it, however, Kara-France landed a phenomenal combination on the break. Nam burst forward and Kara-France landed two left hooks moving backward. Nam ate the strikes and started pushing the pressure against Kara-France, he threw a nice right hand that landed. Kara-France began working behind his jab and was doing a great job of moving out of the way of Nam’s winging strikes. We soon headed to a third round. 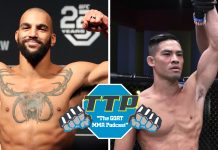