Tim Means was in his own back yard at UFC Rio Rancho, an event he’d asked to take part in following his win over Thiago Alves at UFC DC last year. ‘The Dirty Bird’ was taking on octagon newcomer Daniel Rodriguez, who had garnered some sympathy heading into the bout. After all, as promotional debuts go, Means was about as nasty an opponent as one could get.

By the end of the night, however, there was no sympathy required. Unless it was for Means.

Means opened up the action with a leg kick, changed levels under a punch and scored a takedown. Rodriguez was right back up, but statement made. The fight then moved into a back-and-forth, single-strike sort of affair. Not a lot of combos, at least to the midway mark of the round. Means was able to back Rodriguez up to the fence, and nearly caught a kick. Means continued to hold center, forcing Rodriguez to fight with his back to the cage. Rodriguez would circle out, only to find himself trapped again. However, right as the bell sounded, Rodriguez rocked Means, who dropped briefly and was unsteady getting back to his feet!

Saved by the bell is one thing, but it would be hard to fathom any scenario where the lone minute between rounds gave Tim Means enough time to recover from that final blow in the opening frame.

Rodriguez opened the second with a high kick, while Means landed a left. Rodriguez landed a harder left of his own, and Means was being drawn into a firefight with an opponent possessing superior firepower. Means was rocked again, while moving in with his jab. Means would be wise to get the fight to the ground, but may not have had the clearest head after eating a couple of big bombs. Rodriguez pawed at a leg kick, and Means fired off a spinning back fist in response. With just over ninety seconds left, Rodriguez moved in and connected with several huge left hands! Means finally opted to change levels for the takedown, but Rodriguez caught him in a standing guillotine and forced the tap!

Welcome to the UFC, Daniel Rodriguez. On short notice, the newcomer submitted an always-tough out in the welterweight division. So much for the worry that Rodriguez had drawn a tough assignment. 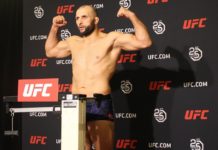 Klidson Abreu vs. Gadzhimurad Antigulov Lined Up for UFC Kazahkstan 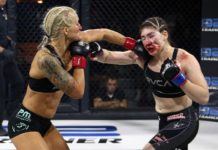