John Dodson had to withstand a pair of low blows on the way to a TKO finish of Nathaniel Wood at UFC Rio Rancho.

Former flyweight title challenger John Dodson is now long removed from his 125lbs days. The Ultimate Fighter winner has been a member of the bantamweight roster for years, and at UFC Rio Rancho on Saturday, he was paired up against a hot young prospect in Nathaniel Wood.

Wood opened the affair with a leg kick, but when he tried to land up top with a punch and grab for a clinch, Dodson was too quick. Dodson would get his own hands going, but Wood found success as well early, with both men landing, but neither doing any significant damage. In a brief clinch, Dodson popped off a barrage of punches then quickly escaped. Wood managed to connect with a straight right. He’d repeat that, but each time Wood landed, Dodson was gone like a puff of smoke. In the final minute, Wood managed to trap his opponent against the fence. Dodson reversed, only to be tripped, but he was quick on the ground as on the feet, and escaped in a heartbeat.

The speed and agility of John Dodson was the story throughout the first round. In the second, that speed continued to shine. Wood tried his best to find angles and cut off the cage, but in the first half of the round, Wood connected low with a kick. He’d take a moment, clearly pained, but soon got back underway. He soon landed a combo, countering Wood’s next attack. Wood then connected low again, which brought about an immediate response from the ref, who implored Wood to keep his kicks up. He also threatened to take a point.

As they got back underway, Wood attacked briefly, but Dodson charged forward, throwing hands and backing Wood up to the cage. Back at center, Wood fired a left, then landed another straight right, a punch that he’d found success with several times. The pair would then grapple against the cage, with Dodson throwing in an elbow for good measure. Wood was cut, a trickle of blood leaking from his eyebrow. That cut would actually bring about a break in the action, as the doctor checked on it. Judging Wood good to go, they got back underway, but had just seconds left in the frame. They made the most of those seconds, trading to the bell.

Early in the third, John Dodson finish the fight. In the blink of an eye, he had Nathaniel Wood on his knees, care of a counter left that landed square on the chin. Wood went down, was covering up, but Dodson was relentless with his follow-up strikes. The ref waved it off, and Dodson had the victory!

Watch it LIVE on ESPN+ pic.twitter.com/3v7PAOHUJB

The win snapped a two-fight skid for ‘The Magician,’ who handed Wood the first loss of his UFC tenure. 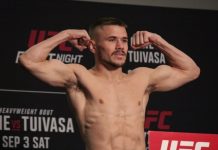 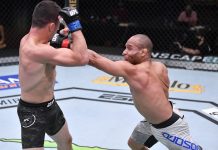